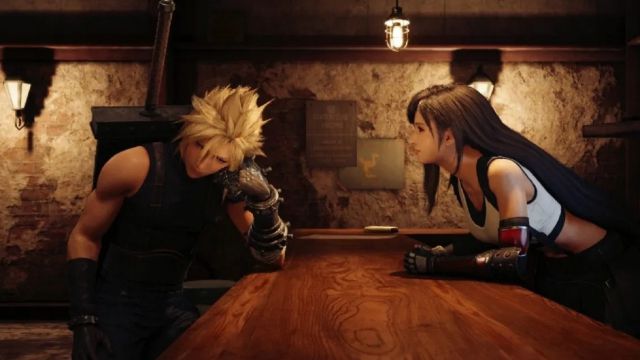 Final Fantasy VII Remake Intergrade: The texture of the door of the apartment that Cloud is staying in after being hired by Avalanche has finally been corrected. When the first patch of Final Fantasy VII Remake came out on PlayStation 4, it was soon discovered that no, that the famous texture of the door was still there. Perhaps some were hoping that it would be corrected later, but everything seems to indicate that players of the previous generation will have to live with the blurry texture. Not so those who acquire Final Fantasy VII Remake Intergrade, the version optimized for PS5. It has been confirmed that this graphical defect is no longer present, as Square Enix has corrected it with a new texture.

The proof has appeared in a Reddit post, where a completely revamped texture has been shown. What we don’t know is whether another of its graphical flaws, the infamous view of Midgar from above, continues to be a blurry texture. Regardless, we won’t have to wait long to see all the graphical changes that have been made to Sony’s next-gen machine.

Move the game from PS4 to PS5

The days of the calendar are practically crossed out. Square Enix will release Final Fantasy VII Remake Intergrade on June 10 exclusively for PS5. For this reason, the Japanese company has released a new update for the PS4 version, which allows you to transfer the saved game from one console to another. Once the patch is applied, a new option appears in the main menu, which allows you to upload as many games as the player wishes.

The optimized version will be released as a standalone title, although those who have the game on PS4 will be able to update completely free. Additionally, the first and only content expansion will be released on the same day. It is a parallel adventure starring Yuffie, one of the extra characters from the original title. Although we can only handle her during combat, Sonon will assist us with her powerful abilities when the situation calls for it.