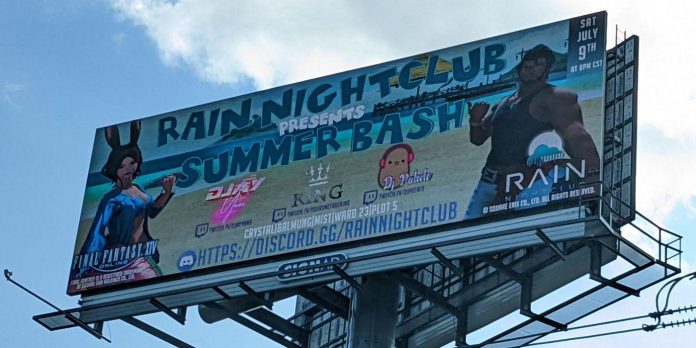 Players use real billboards to advertise upcoming Final Fantasy 14 in-game parties at a nightclub. While Square Enix’s most recent fantasy MMO had a rough initial launch in 2010, Final Fantasy 14 was eventually able to change thanks to a massive retooling and relaunch three years later, and the game has amassed a large and loyal FF14 player base ever since. Set in the medieval land of Eorzea, Final Fantasy 14 allows players to create their own characters from a variety of different races and classes before engaging in a wide range of side quests and actions.

In addition to the usual epic quests and monster battles that accompany any Final Fantasy game, players used the Final Fantasy 14 online platform to engage in interesting virtual hobbies, such as gardening and creating items, as well as collecting treasure maps for sale to other players and even try their luck in the daily Mini Cactpot lottery from Gold Saucer. In the world of Final Fantasy 14, there are even in-game nightclubs run by players, and often everyone participates in them, from bartenders to DJs and nightclub dancers — they can all earn gil in exchange for their virtual services. At the height of the summer season, it is not surprising that many of these clubs now hold special meetings for those who want to take a break from killing monsters and treasure hunting.

According to GamesRadar, some of these Final Fantasy 14 players are using billboards in the real world to draw people’s attention to planned virtual holidays in cities such as Austin and Houston, and even more are planned to be placed in California. One of these players is AbyssalFel, who recently posted a message on Twitter showing a billboard for an in-game beach party at the Rain nightclub, which their avatar from Final Fantasy 14, Akiva Balthazar, will host on July 9. In one of the responses to his tweet, AbyssalFel explained that the owner of the Rain nightclub paid for the billboards and that their installation was not worth much.

In addition to in-game gatherings, Final Fantasy 14 has received a lot of news thanks to the ongoing wave of DLC expansions that have added new arenas and gameplay elements, as well as small improvements in the quality of life in the existing mechanics of Final Fantasy 14. Additionally, Square Enix recently offered new players the chance to play 96 hours of Final Fantasy 14 for free at the end of last month, allowing them to go through at least three add-ons and get enough of a taste of the game to decide if they want to sign up. for the official subscription of Final Fantasy 14.

Those who have decided to continue playing FF14 after this free offer will be able to relax at the upcoming beach party at the Rain Nightclub on July 9th, as advertised by real billboards paid for by the virtual management of the club. While this roadside advertisement can fly over the heads of any passerby who doesn’t know about Final Fantasy 14 or its in-game nightclubs, it’s interesting to see how something like an MMO party is progressing in the real world.