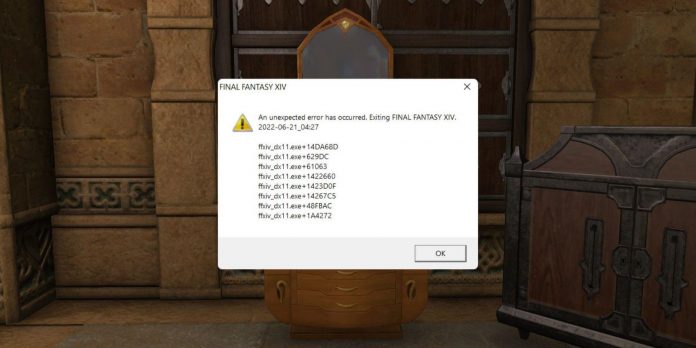 Final Fantasy 14 players encountered an error that caused their game to crash on the desktop when they were searching for items under certain conditions. Although the exact characteristics of the crash are unknown, the problem seems to be related to the Glamour Chest extension from Final Fantasy 14 Patch 6.2.

The Final Fantasy 14 crash bug that appeared after the last major content update released on August 23. In addition to providing new combat content for Final Fantasy 14, this update has also doubled the storage of players’ glamorous chests from 400 to 800. However, this Extension seems to have caused a problem if players used the /isearch command to search for certain items in their various inventories.

Several players had games crash on the desktop, which indicates that this is not an isolated case. The players immediately tried to figure out what exactly caused the crash. While many thought it was due to a full Glamorous chest, additional testing seemed to show that the character’s Chocobo saddlebags were involved. Although a definitive solution to the Final Fantasy 14 glitch has yet to be found, players currently believe that storing more than 3,200 items in inventory and opening the chocobo saddlebag distorts the search data, causing the team/isearch to crash.

There has been no official statement from Final Fantasy 14 about this crash, but players can assume that the developers are aware of the crash due to numerous bug reports. If players encounter similar failures, they should send additional reports so that developers know about it. Meanwhile, players have found a way to avoid crashes: by deleting the itemfdr.dat file from the Final Fantasy 14 character folder. This file stores item search data for the character, so deleting it should prevent further crashes, provided that you don’t re-open your chocobo saddlebag, and that the players have successfully identified the bug in the first place.

This is not the first and not the last glitch in Final Fantasy 14. With the ever-growing population of the critically acclaimed MMORPG, players are sure to discover more bugs in the system, especially when it tries to expand storage. options and add new game tasks. The forum dedicated to finding out the cause of the crash is full of players working hard to help developers, and it’s inspiring. We hope that the hard work of these players will help Final Fantasy 14 develop a quick fix for this peculiar glitch.

Godfall: Challenger Edition Will Also Be Sold Separately; Everything That Includes