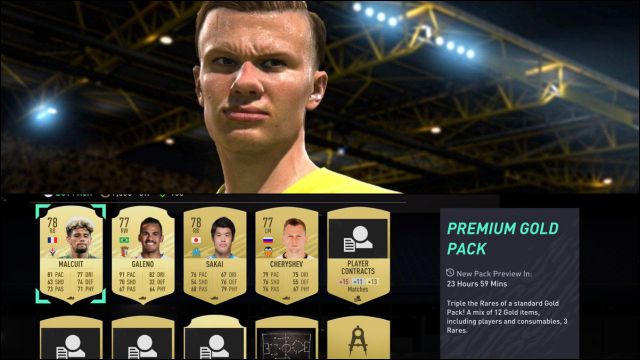 FIFA Ultimate Team: Electronic Arts explains that players prefer to see what is included in each loot box. They celebrate your welcome and higher conversion rate.The FIFA Ultimate Team loot boxes in recent FIFA installments have been one of the main focuses of criticism among the public. Despite this, acquiring temporary content without knowing what is inside, as if they were envelopes of cards, works in the context of many video games; it is addictive. Electronic Arts launched the so-called Preview Packs last June, which can be over-previewed in the Ultimate Team mode of FIFA 21. As they explain to their investors, the conversion rate has grown and the reception has been very positive.

Preview Packs, alternatives for players who want to play it safe

Andrew Wilson, CEO of the North American firm, explained during the presentation of last quarter’s financial results that “the short answer is that they have been very well received by the community.”

“The Preview Packs, as he put it, have been well received. We have seen an increase in engagement, and we have identified a higher conversion rate of players who spend “with real money, stresses Wilson.

The conclusion we can draw from all this is that loot boxes work even better if you know some of the contents that we will find inside. “We believe that we can continue to grow that business over time,” he concludes. It should be said that FIFA Ultimate Team accounts for almost 30% of EA’s total revenue. In 2020, Ultimate Team posted year-on-year growth of 16%.

The FIFA Ultimate Team Preview Packs do not replace traditional packs, but have been consolidated as an add-on. With 24-hour rotations from when we see their content but do not acquire them, these preview envelopes are an economic success for EA, which will continue to bet on these contents in FIFA 22 when it hits the market on September 30.