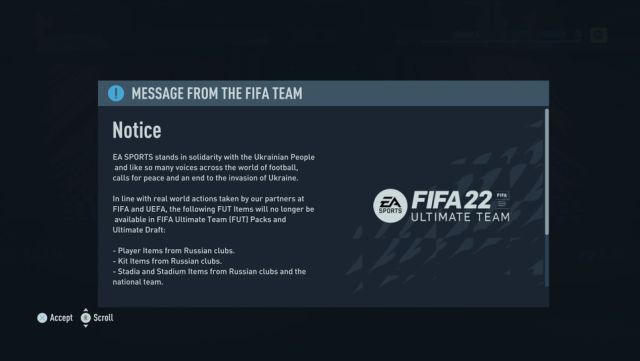 FIFA 22: Due to the war in Ukraine, EA Sports has taken matters into their own hands and has acted in both the main game and Ultimate Team. The fate of Russian players and teams in FIFA Ultimate Team has been uncertain ever since EA Sports announced it would be removing them from the main game. The Russian-orchestrated war has escalated after a night of bombing. Meanwhile, video game companies continue to position themselves against the invasion and the humanitarian crisis. Via an internal in-game message, Electronic Arts has revealed that it will no longer be possible to get Russian footballers and teams in FUT packs.

The statement that appears in-game is essentially the same as the one previously shared, when they revealed that players and teams from the Russian Federation would say goodbye. Of course, they add the objects that they will eliminate from FUT.

Official statement and everything they remove from FUT

“EA Sports stands in solidarity with the people of Ukraine. Like so many voices in the world of football, we call for peace and call for an end to the invasion of Ukraine. In line with actions being taken by our FIFA and UEFA partners in the real world, the following FUT items will no longer be available in FIFA Ultimate Team (FUT) packs and Ultimate Draft.”

Russian team player items
Russian team kits
Russian Teams and National Team Stadia Items
FIFA has already expelled Russia from the qualifying round for the World Cup in Qatar. UEFA, for its part, has done the same with its competitions.

EA Sports has made the same decision in another of its licensed titles, NHL 2022, and is studying the possibility of doing so in the F1 saga, from Codemasters, a company that belongs to Electronic Arts.

Chris Hemsworth Reveals If He Wanted Love and Love Thunder to...