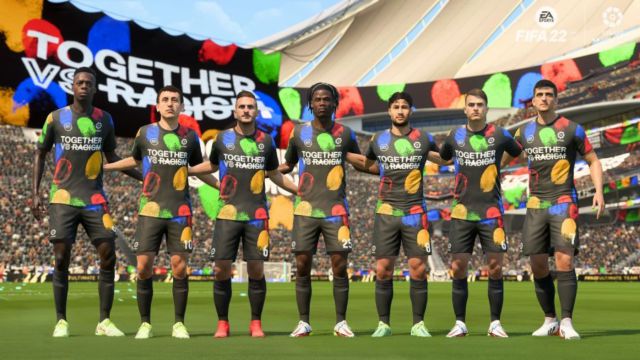 FIFA 22: The Electronic Arts football simulator and the organization led by Javier Tebas will work side by side to condemn any type of racist act. FIFA 22 is the football video game in fashion, and how could it be otherwise, LaLiga has set its sights on it to continue its campaign against racism. The organization chaired by Javier Tebas and EA SPORTS wanted to show their commitment to fighting racism both in the world of football and in society. Among the planned movements, the video game has just received a special kit designed with the fingerprints of the different soccer players who have been victims of racist acts throughout their career.

In addition, as part of LaLiga’s Week Against Racism, in which we will often see the slogan “Together Vs Racism”, EA SPORTS will show its involvement with actions such as a social media campaign designed for fans participate from home. David Jackson, vice president of the company, commented that he is proud to “be a member of LaLiga, to support its fight against racism and to share a continuous commitment to combat this problem in football and in the world in general. The Together Vs Racism kit is an opportunity for fans to show their support in the game.”

During the last few days we have witnessed a dangerous proliferation of episodes of racism in our football matches. Without going any further, Vinicius Junior received this type of insult in the middle of the match between Mallorca and Real Madrid, something that the vermilion club itself has been condemned; the authors of the insults will be expelled from the stadium. Nico Williams at the Benito Villamarín Stadium, the young Peter Federico in the Madrid derby of the Youth League and Carlos Akupo (Cádiz) in Los Cármenes, among others, are added to the list of footballers who have recently suffered this type of act.