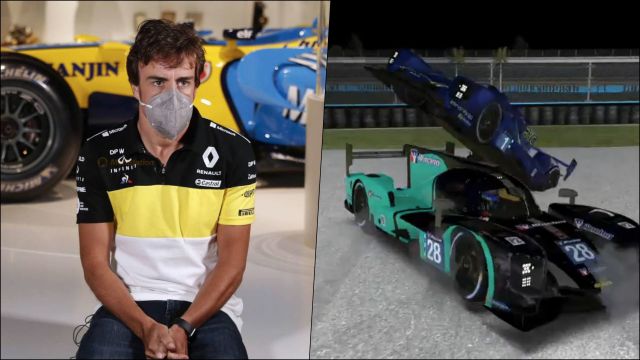 IRacing users accuse Fernando Alonso of deliberately crashing into a rival in the middle of the race. Another player shares the replay.

Fernando Alonso gets into trouble. IRacing players accuse him of having deliberately collided with an opponent during the course of a race in the famous simulator. Also, one of the users uses the replay system to capture the moment.

The clip, which you can see at the top of this news, is provided by Tygrysmati on Twitch. The author centers the camera on the back of Alonso’s car, which appears in green throughout the game. After receiving an overtaking on the outside of the blue car, the Asturian faces the curve at the end of the straight, as always. The problem is that he does not seem to brake, or is doing it too late, which leads him to ram the car in front from behind.

Both vehicles hit the Daytona tires, losing the trail of the peloton. Given the importance of iRacing careers, we do not know if an investigation will be opened to clarify the event. What is clear, especially for those of you who don’t know the simulator, is that the pilot is the real Fernando Alonso. All players must run with his real identification; it goes beyond a video game.

As for the personal situation of the driver, Alonso is preparing for his return to the great Formula 1 circus. He will do so at the wheel of Alpine’s A521, Renault’s project in this transition of his long-standing team in the competition, together with the French Esteban Ocon. The Asturian already rolled a weeks ago aboard other Renault cars from previous seasons, such as the RS18. Luca de Meo, CEO of the French brand, has ambitious plans with the brand.

It’s no wonder that active drivers like Alonso have been turning upside down in online competition lately. Last year we read the feelings of Andy Soucek, Spanish GT driver for Bentley, when he got behind the wheel of Assetto Corsa: “I notice everything on the track on the wheel,” he explained to Game Time.

The introduction date of the Redmi K40 series