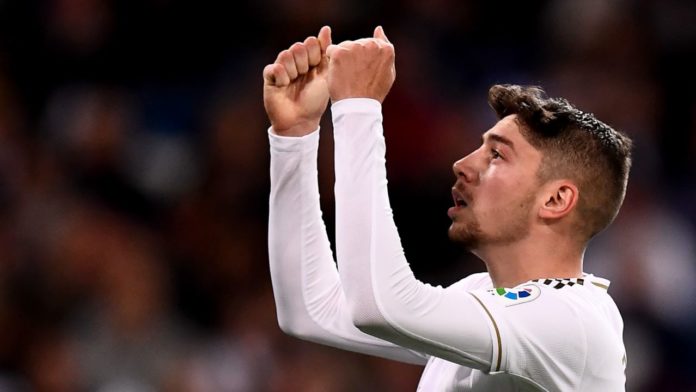 Fede Valverde is one of the great revelations of the season for Real Madrid. The midfielder has settled with a place in the eleven of Zinedine Zidane, sitting the current champion of the Golden Ball, the Croatian Luka Modric.

His performances are surprising everyone, to the point that the cadre of the capital of Spain has not lost this season with that of Montevideo on the pitch.

After playing 25 games in total last season with the white squad, Valverde started the season with unknowns, the first complete by the French coach since returning to Real Madrid.

However, only one month was enough to begin to take ownership in the center of the field. After only playing 22 minutes in the first 5 days of the League, everything changed in the match against Osasuna, in which he played 82 minutes and was one of the leaders of the whites.

This good performance against the Navarrese led Zidane to surprise in the derby against Atletico de Madrid and align the international for Uruguay. With 42.9% of his duels won against the rojiblancos and almost 86% of success in his passes, Valverde showed that it was a reality and that he was in Madrid to stay.

The duel against the rojiblancos was the only match in which the Concha Espina team could not win. However, Fede Valverde showed that he was more than prepared to play in the elite, next to the best.

Before Granada, since the first two duels of the season in the Champions League did not participate, either because of an injury, or because of a technical decision, he stood out again, giving his first attendance of the course and taking a step forward again.

See Also
Valverde praised Vidal after the title and goal: "He is a useful player"

After not starting in the duel against Mallorca, in which Real Madrid fell defeated, Valverde returned to eleven in the decisive clash against Galatasaray, in Turkey, where with 79.5% of success in the passes and with More than half of his duels won, he showed that he did not have to move from ownership, that eleven is his place.

In the clash against Leganes, the charrua returned again to the starting eleven in the National League Championship, and with him in the field, the white box got a win (5-0) against an inoperative cucumber box.

In the following match in the Santander League, Valverde did not even play a single minute in the duel against Betis and that was noticed. A zero draw at the Bernabeu against the Verdiblancos that left many doubts about the team led by Zidane.

A circumstance that soon solved. Before Galatasaray, at the start of the second round of the group stage of the Champions League, Valverde was again the starter and the eleven merengue got a contiguous win, 6-0.

Finally, before Eibar it was definitely the explosion of a Valverde on a roll. 81.8% of success in his passes, not to say he scored the last goal of the match with his right leg. An unstoppable launch that only confirmed the rise of a player who can become the midfielder of the future for Real Madrid.