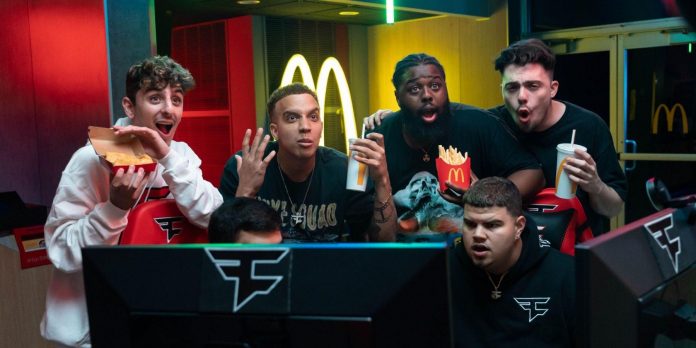 The popularity of competitive games has increased dramatically over the past decade thanks to numerous collaborations and partnerships that have led to the growth of this scene. FaZe Clan has played an important role in the overall growth of esports: the legendary team boasts several championships in many games, and major content creators help the development of FaZe. Continuing to pave the way forward, FaZe Clan has announced the renewal of its deal with McDonald’s with an exciting future for both partners.

Since the creation of FaZe in 2010, when the team focused on the sniper tricks of Call of Duty, in recent years FaZe has grown exponentially and gathered teams in other games. FaZe currently hosts teams for games such as Valorant, Rocket League, Rainbow Six Siege and Counter-Strike: Global Offensive. FaZe still holds a dominant position in Call of Duty: Atlanta FaZe won the championship in the 2021 Call of Duty League season. FaZe has grown and hopes to continue its growth through a renewed partnership with McDonald’s USA.

Almost a year after the initial deal was signed, the extension announcement came from the official FaZe message page. This deal further contributes to the goal of creating new new ways to connect and communicate with the next generation of gamers. FaZe Clan and McDonald’s will visit PAX West in Seattle, Washington, where the duo will hold a booth for fans to meet talent and play new games that will be released soon.

As already mentioned, this is an extension of a previously concluded deal. When FaZe and McDonald’s first signed a partnership agreement, both groups collected a lot of new content, such as the series “In the Spotlight”, which garnered more than 2.4 million views, and the live broadcast of “Friendsgaming”, which attracted more than 300,000 live viewers. New content will come from both parties, although the nature of the content has not yet been disclosed. This update marks a successful year for the organization as FaZe strengthened its core with the addition of WWE Chief Brand Officer Stephanie McMahon along with Snoop Dogg.

Esports is growing, and such deals continue to go beyond the realm of possibility as teams seek to go beyond games. Despite the fact that FaZe Clan has a controversial history, the presence of the organization and its goals for the development of esports cannot be ignored.

Call of Duty Mobile Dives Into Deep Waters In The New...