Home Entertainment Father of the Bride Review: A Remake with a Little Innovation and... 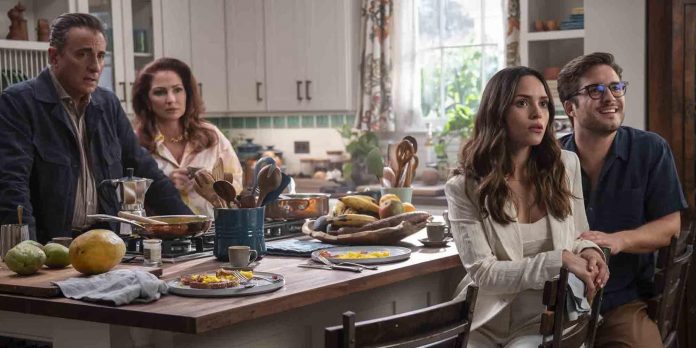 Here we are again with another remake of the Steve Martin film, which itself is also a remake originally based on the novel by Edward Streeter. This version The bride’s father turns the Banks family into the Erraras, a Cuban-American family headed by the grumpy patriarch Billy Herrera (Andy Garcia). Billy is going through difficult times — his marriage is collapsing, and his two daughters have grown up in an independent life. It seems that Billy can’t do anything to mitigate the impending catastrophe (through his fault) when his eldest son gets engaged.

“Father of the Bride” continues the same hackneyed story, but offers several twists. The titular bride Sofia (Adria Archona) is an ideal daughter who grew up a successful, self—sufficient lawyer and a modern woman. Her progressive views directly contradict Billy’s old school way, which drives the narrative. While visiting her family, Sofia casually announces her engagement to a man she knew only recently, but Billy is annoyed that his little girl has proposed. Then the audience meets Adan Castillo (Diego Boneta), a kind man who cares about the world and wants to work together with Sofia in a non-profit organization in Mexico (also his home country), which is another thorn in Billy’s side. Sofia and Adan represent a modern couple who want to grow together and support each other, and not fall into the usual gender traps.

By topic: 10 behind-the-scenes facts from films about the bride’s father

What happens when the father of the bride meets his future son-in-law and his family is a series of cases caused by prejudice and great pride. The inequality in wealth between the bride’s family and the groom is not so important in this iteration. Rather, Billy’s fears and anxieties stem from a sense of uselessness and lack of responsibility. Billy may disagree that Adan is different from others — prefers tea to coffee, openly dislikes boxing and is not money—oriented — but Adan is not the problem that Billy needs to overcome. The film also tells about Billy’s stubborn character. His wife Ingrid (Gloria Estefan) is striving for more from their marriage now that she is no longer raising her children and he doesn’t have to keep working to support everyone. As in previous films — the 1950 film starring Spencer Tracy and the 1991 film starring Steve Martin, respectively — the titular father has to come to terms with the fact that his daughter is already an adult, and he needs to change in order to keep his relationship with her and the family free.

Matt Lopez’s script is good, although there is nothing remarkable about it. However, the dialogues, in particular, feel restrained. There is an obvious attempt to appeal to a non-Latin American audience, with most of the dialogue being conducted in English, even when most of the characters can speak Spanish. This is not a reproach to the film. However, the inclusion of fake progressive white characters who ignorantly emphasize their R’s and combine Cuban and Mexican cultures with Spanish culture for laughs is a sign that all is not well in this film. The bride’s father, of course, didn’t need scenes in which white people behave ignorantly and then mockingly thank the main characters for “holding them accountable” when they are called.

As for the comedy of the film, there is always a slight hint of something in the current cultural discourse, for example, the term “Latin American”. The comedy is expected to grow out of these fleeting moments, but it fails because the film stumbles when it has to recall the original story and previous versions. Jokes are born out of hackneyed cliches and archetypes, and they clearly lack humour and originality. This version of “Father of the Bride” follows the same path as the previous versions, but with some workarounds that are quite expected and not at all interesting. The bride’s father seems confused. It can’t be a full-fledged drama about a disgusting father wreaking havoc at his eldest daughter’s wedding, nor a non-standard comedy about a father distraught with grief. And so he remains in limbo for two hours. A few laughs and bleary-eyed moments aren’t enough to convince the audience to reconsider it if they manage to watch it in full at least once.

All this suggests that the competent filmmaker Gary Alazraki, combined with Terence Blanchard’s jazz-based music, is enough to attract attention. In addition, the costumes are impeccable, and the outfits of the Archon, created by the client designer Caroline Eselin, are the most attractive. The film has everything you need to distinguish it from previous iterations and create a certain environment and community. In the end, however, this is a scenario that cannot realize its potential. The bride’s father showed promise, there are a lot of talents on the screen and behind the camera, but the flimsy script let them all down. Lopez is not without merit, because the film adequately adapts the classic fairy tale and transfers it into a living form the ban of the American house in Miami. In addition, however, the story lacks creativity.