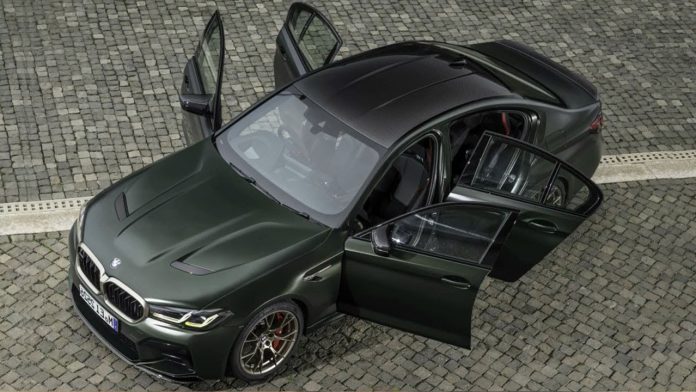 BMW introduced the BMW M5 CS, its most powerful sedan to date. This new monster, which can reach a speed of 305 kilometers per hour, is expected to be available towards the end of the year.

German automobile giant BMW introduced the 2022 BMW M5 C5 sedan, which they call the fastest BMW to date. The new model, which offers an extremely high performance, is lighter than its previous generations and actually owes its high performance to this.

The BMW M5 CS, which can accelerate to 100 kilometers per hour in just 2.9 seconds, produces 627 horsepower with 750Nm of torque. This monster, which is expected to come out towards the end of 2021, is expected to be sold first in the USA and then in Europe.

BMW has designed a very flamboyant car by using the gold detailed designs they call Gold Bronze on the grille edges and 20-inch wheels of the new M5 CS. When the carbon fiber details used on the ceiling, hood, mirror caps and the tiny spoiler placed at the rear are combined with the Gold Bronze design, a stylish and monstrous look emerges.

There is a tiny detail in the interior that will blow the minds of many car lovers. BMW has included the Nürburgring track layout in the sporty seats of the M5 CS. We can say that it is very meaningful that the new model, which is considered the fastest vehicle of its class, features one of the most famous tracks in the world.

There is nothing to say to the BMW M5 CS when it comes to design, but we can say that the new model is also extremely assertive in the interior. The CS logo embroidered on the dashboard, Alcantra-coated steering wheel and headlining is enough to show how high-class the M5 CS is.

Engineers also thought of drivers for this vehicle, which promises an extremely high performance. When Track mode is selected in the driving settings, BMW disables distractions, including the audio system, so that the driver can focus on the road.

Earlier in our article, we mentioned that the M5 CS accelerated to 100 kilometers per hour in 2.9 seconds. However, as most of us know, what is important in such vehicles is how long it takes to reach speeds from 100 to 200 kilometers, not from 0 to 100 kilometers. Such an ambitious car does not disappoint in this regard, and it takes a total of 10.4 seconds to reach 200 from 100 kilometers.

The M5 CS, with a 4.4 liter V8 engine, can reach a maximum speed of 305 kilometers per hour. Considering all these data, the M5 CS offers a much higher performance than the previous generations BMW M5 and M5 Competition.

The most important thing that makes the BMW M5 CS the fastest in its class is that it is designed to be lighter than previous generations. The new model is about 105 kilograms lighter than the M5 Competition, and engineers had to make some innovations in aerodynamics to reach this weight.

iPhone 13 May Have Some Android Features