Home Entertainment Fast & Furious 4 has eliminated one of the biggest holes in... 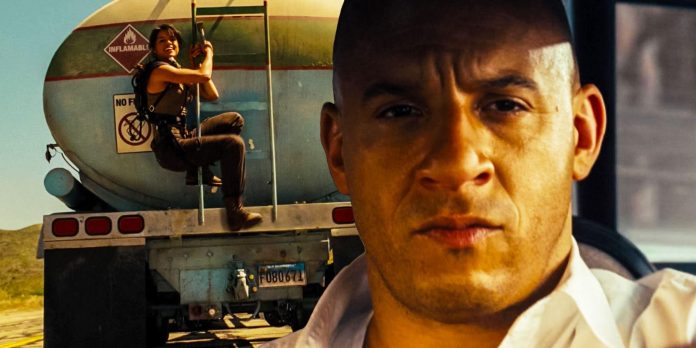 In “Fast and Furious,” the fourth installment of the “Fast and Furious” franchise, the film finally recognizes one of the biggest plot holes that has plagued the movie series since its inception. It all started in 2001 as a drag racing movie in which Paul Walker and Vin Diesel compete with each other, but in nine films and one spin-off, the franchise has turned into an action-spy thriller. The action is based on ridiculous tricks, pompous robberies and focus on the family.

The 2009 Fast and Furious, the fourth film in the ever-growing franchise, is a transitional moment for the series. The first two films are real classics, demonstrating the art of street racing and turning the characters into reality. The third, “Fast and Furious: Tokyo Drift”, sends viewers abroad to Japan, mostly with new characters and redirection of the main storylines. In Fast and Furious, Vin Diesel and Paul Walker return in a big way, as Walker’s character Brian O’Conner is now an FBI agent who must work with Diesel’s Dominic Toretto to punish those responsible for the death of Letty (Michelle Rodriquez).

However, as the characters of the Fast and Furious series become spies driving fast cars, one plot hole becomes apparent: for a franchise based solely on cars and other vehicles, it seems that cars that drive around the world never need gasoline, and there are none ever seen how cars are refueled with gasoline. But “Fast and Furious” finally solves this problem with its opening scene, recognizing reality. In the opening episode, the gang travels through the Dominican Republic and hijacks a fuel tanker halfway through. Of course, since this is the Fast and the Furious movie, the tanker explodes falling off a cliff.

For the Fast and the Furious films, which mainly tell about international fugitives and the espionage of double agents using various vehicles, it is safe to say that three minutes of screen time spent refueling a car can be wasted. However, after a while it becomes funny that almost none of the characters discuss the need to stop for refueling, even when they see them stopping for other things like eating or making an action plan. “Fast and Furious” finally reflects the fact that, yes, gas does exist in this fantasy adventure film series, but the characters don’t care much about it.

This is not the only hole in the plot of the Fast and the Furious franchise — for example, it has never been explained whether they kept money from the robbery of the Fast and the Furious 5 bank vault — but it is certainly one of the most obvious. Because this franchise works best, the characters create more problems for themselves before the convoluted plots take over, but there’s always a lot of fun along the way. Despite the fact that it never seems that their very expensive cars will ever need gasoline, the characters of “Fast and Furious” at least try to show the audience that they tried.

Zelda: Breath of the Wild becomes FPS with glitch help

David Attenborough has proved how wrong the dinosaurs of the Jurassic...