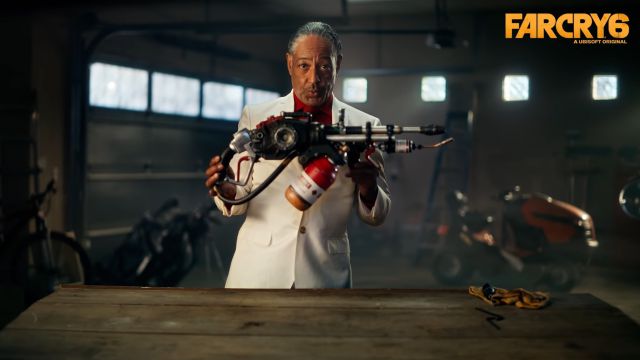 Far Cry 6: The Breaking Bad and The Mandalorian actor, who plays the game’s antagonist, appears in four new videos. Antón Castillo is the president, the bloodthirsty dictator who squeezes and squeezes his citizens until all the blood is removed from their bodies. He does it metaphorically, but also more literally, at least when he tortures those who oppose his reign of terror. Giancarlo Esposito, known for his roles in Breaking Bad (Gustavo Fring) and The Mandalorian (Moff Gideon), appears in four new videos published on the official Far Cry 6 account. Dressed as his character, he not only presents the weapons of the guerrilla , but also answers questions from followers.

One of the questions he answers is whether players will be able to control his character in the video game. As much as some were interested in sowing destruction among the guerrillas, the answer is that no, it will not be possible to do so. “I am the dictator who governs, who do you think you are?”, He replies.

The funny thing is that Esposito does not appear on screen as the actor, but as the president himself. “Is Diego evil?” Some may ask. “Again with this. What is your definition of ‘evil’? Some things that are perceived as evil are better for people and need to be done to keep order. ”

The island of Yara, on the brink of internal war

Antón Castillo became president after democratic elections, but his ambition led him to love power above all else. He believes that he is doing a favor to the citizens, that Yara will shine again as before, but meanwhile, the people suffer and the guerrillas begin to organize with a single purpose in mind: to overthrow the totalitarian regime that governs them.

Far Cry 6 will be released on October 7 on Xbox One, Xbox Series X, Xbox Series S, PS4, PS5, PC, and Google Stadia. Those who purchase the previous generation version will have the opportunity to upgrade at no additional cost, in line with other intergenerational products published by Ubisoft to date.

Captain America and Batman destroyed their buddies in the same way

How To Put A Video On The Start Page Of Microsoft...