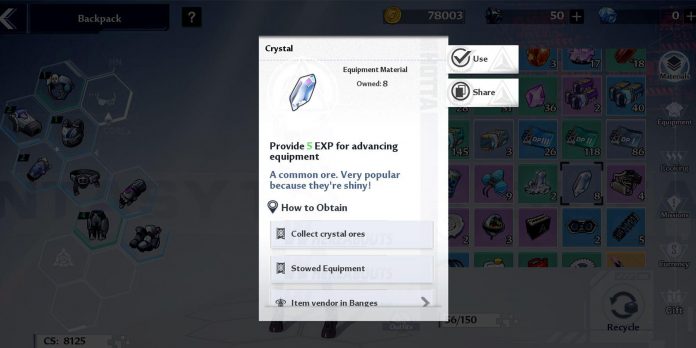 Exploring the vast world of Aida in Tower of Fantasy, you can find a lot of necessary resources, one of which is Crystals. These resources are generously scattered throughout the Esperia, and they can be obtained in several ways, such as collecting or buying.

Crystals are used to level up equipment in Tower of Fantasy, which rewards players with five EXP after each promotion. These brilliant resources can help increase the Wanderer’s stats, as well as improve his survival rate when he engages in combat.

Where to collect crystals in Tower Of Fantasy

Crystal pillars in the Tower of fantasy

Crystal columns can be found in large numbers throughout Esperia. It’s impossible not to run into one of them while exploring regions to clear enemy camps or collect ingredients in Tower of Fantasy. To get started, players can start collecting crystals in these specific areas in the following regions:

Banges: HT201 shelter, Banges Farm in the north and black market in the southwest. Corona: South Seaforth Dock and South of the Forgotten Land. Warren: South and southeast of the Saag Passage.

Crystals can definitely be seen in other places, but not as condensed as in the previously mentioned areas.

Crystal Clusters in the Fantasy Tower

Like many resources, clusters of crystals can also be seen in several places, although not as often as pillars. Each cluster has an element, and it can be destroyed by the corresponding element, for example, as a fire cluster is broken by a fire weapon and so on. These resources are mainly collected in Tower of Fantasy Astra, Banges and Navia.

Buying crystals from a seller in Tower Of Fantasy

After opening the Backpack and selecting Crystals, the wanderers learn that one of the ways to get it is to buy a resource from a seller. By clicking on this option, you will mark the seller’s location on the map. Players just need to go to the location, which is located in the Banges Dock, and climb to the top floor to buy from the seller. In addition to crystals, he also sells items that can be used as gifts for Tower of Fantasy characters, increasing the level of intimacy.

Recycling Equipment in Tower Of Fantasy

Inside the backpack in the “Equipment” category at the bottom there is an option “Recycle”. By clicking on it, players will be able to recycle their additional unused equipment to collect crystals.

However, it is worth remembering that any recycled equipment will be lost forever, so players should be careful not to choose rare, for example, purple or gold.

Elven Ring Player Points Out a Creepy Detail About the Armpit...