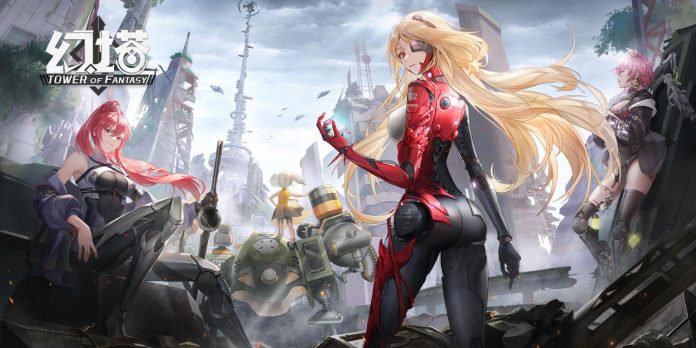 When Genshin Impact was launched in 2020, it became one of the most successful free games of its kind. Tower of Fantasy, created by Hotta Studio, aims to challenge Genshin Impact for the throne of gacha; however, this sci-fi MMO is too secondary, and the few new ideas it brings are not a convincing argument for why fans should waste time and money on such an unpolished the game.

Tower of Fantasy is not a new game; in fact, this title was first launched in China at the end of last year, and just a few weeks ago found its place in the West. Considering that games like Genshin Impact are already approaching the two-year mark, and players are probably looking for a new gacha game with a shared world to sink their teeth into, Tower of Fantasy came in handy. On paper, Hotta Studio’s debut game looks like it should have everything that is in the popular F2P game miHoYo, and even more – the addition of mounts and a special emphasis on MMO elements such as PvP. However, in practice, none of its main components is ever anything exciting or worthwhile.

Starting with the plot, players take on the role of a Wanderer: an adventurer who finds himself separated from his twin at the beginning of the game, and then finds himself in a small colony on the planet Aida. Parallels with Genshin are already beginning to be seen. Aida is in the post-apocalypse stage, when people were almost destroyed after their exploitation of the Omnium resource almost devastated the planet. The surviving people and factions on Hades are fighting for the use of Omnium, with some considering it evil, while others consider it necessary for survival. The main character finds himself in friendship with siblings Zeke and Shirili before the catastrophe breaks out, and the player firsthand plunges into the politics of the warring factions of Aida.

The plot of Tower of Fantasy is interesting and unique enough to attract attention, but almost immediately it begins to crack at the seams. From the moment players meet Zeke and Shirili, the game starts throwing exposure and new characters at the player at breakneck speed. Players will regularly meet new characters who try their best to be quirky and memorable, but leave so quickly that players will most likely see no reason to invest in these characters at all. The most important plot points often fail due to poor writing, and this is just a book ending with a lot of exposition dumps. In addition, the presentation of Tower of Fantasy helps the story very little.

Ambiguous voice acting and clumsy animation — that’s what makes up the bulk of Tower of Fantasy commercials. Half of the game’s characters sound like the voice actor really gave his all, while the other half is indecisive and pretty poorly mixed to boot. In addition, Tower of Fantasy sometimes likes to give cues to one character throughout the cut scene, while another character does not have them. It is inconvenient to worry and feel worse, as the characters move their hands very stiffly and nod their heads to each other. Players will have to go through these sequences to get the next story quest, which usually involves gathering resources or finding a McGuffin, which is typical for MMO, but without any driving force why players should continue to do this chore.

Combat is where Tower of Fantasy gains momentum and proves that the game has some teeth, but it only seems a little less superficial than its plot and quest counterparts. Tower of Fantasy allows players to always have three types of weapons, each of which contains one of four elements effective against enemies weak to this corresponding element. When the weapon has accumulated enough charge in battle, players can change weapons to activate a special technique. Combined with the slow-motion gameplay mechanics that occur with perfect evasion, Tower of Fantasy can look pretty smooth in action. However, the main battle cycle of the game in practice seems completely meaningless.

In terms of combat, the main drawback of Tower of Fantasy is weak enemies with very boring attack patterns. Almost every low-ranked enemy in the normal world remains stunned when hit and is quickly knocked down by simply pressing the attack button. Sometimes enemies break out of this stunning state and fight back, but then players can use the generous game evasion window and continue to spam the mob until it dies. Tower of Fantasy does offer some of the thrill of boss fights, but these fights play out as a more extended version of the same dodging and poking routine, but with a more spongy enemy. In general, the combat system created by Hotta is not capable of creating dynamic combat situations in which players have to think about anything other than attacking and then randomly dodging.

In the sequel to Jon Snow, you can finally use 1...