Home News Fans were touched by Damon’s kind gesture in the “House of the... 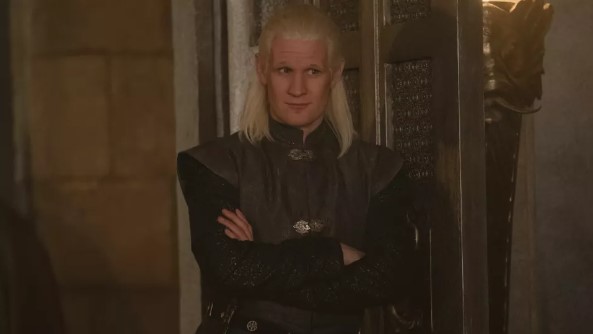 Fans were touched by Damon‘s kind gesture in the “House of the Dragon”, it turns out Matt Smith improvised it.

Ahead of the spoilers of the eighth episode of “House of the Dragon”, read with caution.

Episode 8 of the House of the Dragon was tragic. From the very beginning of the show, we have seen the deterioration of King Viserys’ health, and in the last few episodes it became so bad that it seemed that he could die at any moment. Well, he did die at the end of the last episode, and watching the king struggle to function was terribly sad, especially when he was trying to ascend to the Iron Throne. It was at this moment that we saw Viserys’ brother, Damon, show kindness by helping his brother ascend to the throne. After that moment, it turned out that Matt Smith was actually improvising, and fans loved the prince even more after this rare act of kindness on the part of the prince.

To add more detail to the scene, the king struggles to climb the stairs to the throne, and when his crown falls off his head, his brother comes to help him get his crown and sit on the throne. It was a rare show of sympathy from Damon, and it turned out that it was Matt Smith’s idea to take the crown.

It turned out that Matt Smith improvised the demon’s actions after an accident during rehearsal
Even though Damon is cruel, I mean he literally cut Waymond Velarion’s head in half, it’s clear that he cares a lot about Rainier and his brother Viserys. In an interview with EW, Geeta Patel, the director of the episode, explained that this scene between the two brothers with the crown was not in the script, it was an accident during rehearsal that forced Smith to improvise.

When we were filming this — I think it was rehearsal again, the first day — the crown fell off Paddy’s head and Matt picked it up and we just carried on. We didn’t stop [filming]. There was the discovery of this moment. So the three of us got together, and they said, “We felt it. It seemed like a turning point in our relationship.” It’s just a moment of silence.

This is a really beautiful and touching moment. Especially since Damon seemed to resent his brother for most of the season. Smith explained that you never know if Damon is “aiming for the good” or trying to “cause chaos,” or as if it’s “a bit of both.” In this throne room scene, we saw both sides, and with the king, a real moment of goodness, as Patel explained:

I was so grateful that there was an accident, that the crown fell, because it turned out, at least for me, to be quite a difficult moment and a turning point for the storyline that began in the pilot version: Hey, I want your crown and by the end here I will put the crown on your head and help you ascend to the throne.

This moment of concern was felt by the fans, who had an amazing reaction to the scene with Damon and Viserys.

Fans were so touched by Damon’s kind actions towards his brother
While many of the conversations on social media around Episode 8 were about the Viserys’ eyes situation and Damon’s not-so-kind moment with Waymond, many also wrote about a kinder moment. Especially when they found out it was Smith’s idea, like this viewer:

I am very glad that the crown fell off his head at the rehearsal. Matt Smith has created one of the most touching moments in the got and hotd universe. Damon wasn’t going to let his brother fight anymore. He loves him so much 😭#houseofthedragon pic.twitter.com/uKK0sxN9XAOctober 10, 2022

Another fan drew attention to all the important moments with Damon’s participation in this episode, and I can’t disagree with that. The demon is the “MOMENT”.

Damon himself gets 3 dragon eggs for his three children. Damon wanted Viserys to confirm Luke as Driftmark’s heir. Damon helped his brother and returned the crown to him. Damon killed anyone who dares to call his wife a whore. .He’s the moment.#HouseOfTheDragon #HOTD

I think this fan embodied a lot of our feelings when Damon lifted the crown to put it back on his brother’s head.:

when Damon helped viserys ascend to the throne and put on the crown #HouseOfTheDragon
Just to make you even more emotional about the whole situation, this fan pointed out that this was the last moment the brothers were together, and this may be Viserys’ last memory of Damon.

Damon helps Viserys ascend to the throne and crowns him. And this will be their last memory together. I’m so emotional!#HouseOfTheDragon #HOTD

Meanwhile, this fan has created a great meme, which is also useful. I think the only tear is something that can touch everyone who looks.

In conclusion, this fan pointed out that Damon was one of the few characters who weren’t completely focused on politics in this episode. He took care of his brother and his wife, and did not act out of a need for power.

I’m curious to see what Damon is doing in the last few episodes of House of the Dragon. He is certainly one of the most unpredictable characters in the series. Despite the fact that he is cruel and treacherous, it is clear that he still cares about his family.

According to Fall TV’s schedule, we are nearing the end of HOTD season 1, and it will be interesting to see what Damon does next. To watch the rest of the Targaryen family drama unfold, you can tune in to “House of the Dragon” every Sunday at 9 p.m. on HBO or with an HBO Max subscription.