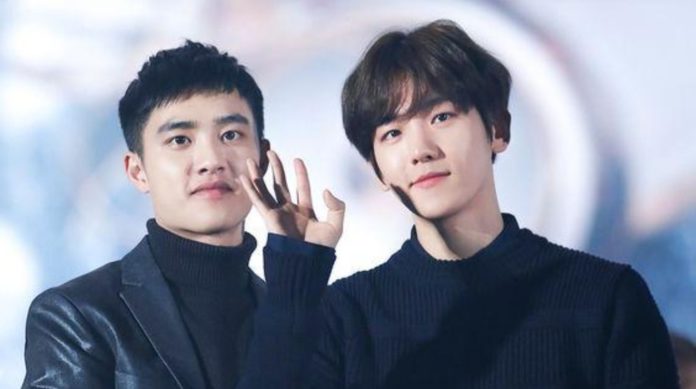 EXO-L is partying! 8 years ago, Baekhyun and DO began a new story in their lives.

Byun Baekhyun is one of the most representative voices of his generation, the 27-year-old idol has also ventured into different facets such as: presenter, actor, model and designer. The fans are celebrating the eight years since the singer of ‘ Stay Up ‘ was formalized as a member of EXO .

DO is one of the idols that has created a thriving career in many areas of Korean entertainment, shares age with Baekhyun , has acted in many films, such as Room 7 in 2017, Pure Love in 2016 and has participated with different songs for dramas , is currently serving his military service.

The identity of Baekhyun and Kyungsoo became known as official members of EXO , together for 8 years , together, on stage they performed the song ‘What is Love ‘, in the presentation case show of the then new group of SM Entertainment .

Dressed in silver, black and white, the idols demonstrated their vocal ability with the song that belongs to the 1st mini album of the group ‘ MAMA ‘, where fans could see how their talents merged. The duo repeated the feat later on the album ‘ EXOLOGY CHAPTER 1: THE LOST PLANET ‘ with the song ‘ Moonlight ‘.

EXO's Baekhyun will reportedly be releasing his second mini album on March 2nd 2020.

He also hints on a possible solo world tour. pic.twitter.com/2bgoB44EWr

With the hashtags #8YearsWithBaekhyun and #8LovelyYearsWithKyungSoo , they became a trend, fans are full Twitter of comments, messages and good wishes, see all the details: