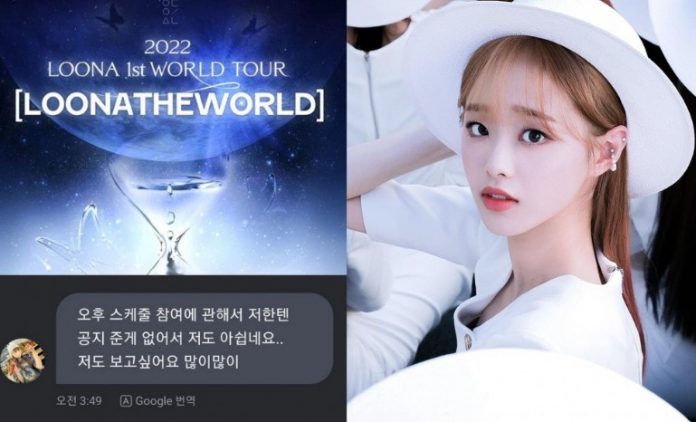 It has been confirmed that Chuu will not be participating in LOONA’s concert, and Chuu’s latest message with fans has attracted a lot of attention as it seems that she has not been notified of the group’s activities.

On September 25, an entry appeared in the online community under the heading “What’s really going on with Chu?” was created. The post seemed to show that Chu was the only one who didn’t receive any notification about the “First LOONA 2022 [LOONATHEWORLD] World Tour In SEOUL”, which will be held at the Olympic handball stadium SK from October 15 to 16. But other participants explained that they had already received information about the event.

The netizen who created the post posted Chu’s message in the Fab fan communication app along with a message from another participant.

Chu wrote: “They didn’t give me any schedule notifications in the afternoon, so I’m sad… I miss you too… very, very much.”

On the other hand, participant Eugene explained that all participants have already received notification via their group chat about the event schedule. Eugene wrote: “Yes, yes. The announcement was made via a LOONA group chat with all twelve participants and a schedule. So I already knew!! I’m excited!!”

When this message spread online and rumors surfaced that Chu had been removed from the group chat and that she had been intentionally excluded, Chu shared another message in an attempt to clarify the situation.

However, Chu did not say that she received a notification about the concert, as did the other participants. In fact, MyMusicTaste, a platform associated with K-pop concerts, has confirmed that Choo will not participate in the 1st LOONA World Tour 2022 [LOONATHEWORLD], disappointing many fans of Choo.

Jimin Became A Highlight Of “The Fact Music Awards 2022”