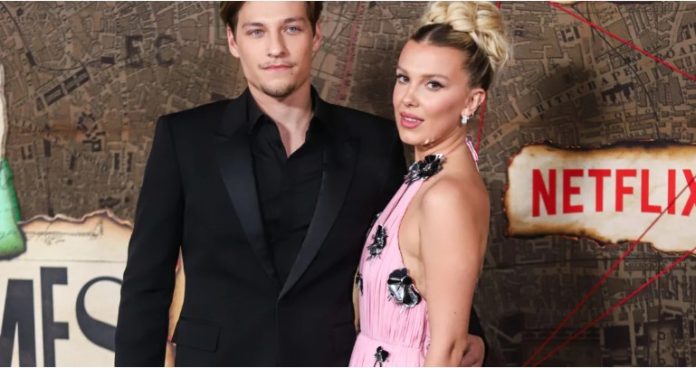 Millie Bobby Brown and Jake Bongiovi are one of the most beloved couples in the modern film industry. The young couple has a huge fandom, and fans can’t get enough of them together. The couple also rarely disappoints their fans. Whether they’re walking the red carpet together, having fun at Disney World, or just fooling around, these two are inseparable and adorable.

Just a day ago, the star of “Stranger Things” even uploaded a video in which she and Bongiovi are passionate about holiday decorations, even though it’s only November. The cute clip convinced even their countless fans to immerse themselves in the pre-holiday mood.

“It’s starting to feel a lot like Christmas. Wherever you go.” Although it may be a little early to think about Christmas, given that it’s only the middle of November, Millie Bobby Brown has fully embraced the most magical time of the year. The British actress and her boyfriend Jake Bongiovi seem to have already started preparing for Christmas. Recently, the actress of the movie “Godzilla vs Kong” posted a slow-motion video on Instagram where they hang Christmas decorations.

Both Brown and Bongiovi put on cozy and large Disney-style pajamas and comfortable T-shirts, decorating a huge Christmas tree. The Christmas tree is so tall that actress Enola Holmes has to balance on the railing of the stairs, and Bongiovi stands on a chair to hang decorations. A young couple in this cute home environment with Mariah Carey’s song All I Want For Christmas is You melted the hearts of their fans, and the comments section was filled with heartfelt messages from their subscribers.

While several Instagram users remind the 18-year-old actress that it’s too early for Christmas, many of them claim that Brown’s words/actions are final. If she says it’s Christmas, then it’s time to celebrate.

Most of the audience also could not pass by the identical pajamas with Mickey and Minnie Mouse.

However, most fans were just thrilled to see the couple together. Together with Brown and Bongiovi, the actress’ dog also appeared in the video, which caused the delight of fans.

Even Mariah Carey, the Supreme Songbird herself, showed her love to the charming couple. Although she admitted she “lived for it,” she was also a little overwhelmed by the early celebration.

Did the video of Millie Bobby Brown and Jake Bongiovi also make you feel Christmas-like? Let us know in the comments. In the meantime, you can see Brown in her latest movie, “Enola Holmes 2,” which is streaming on Netflix.