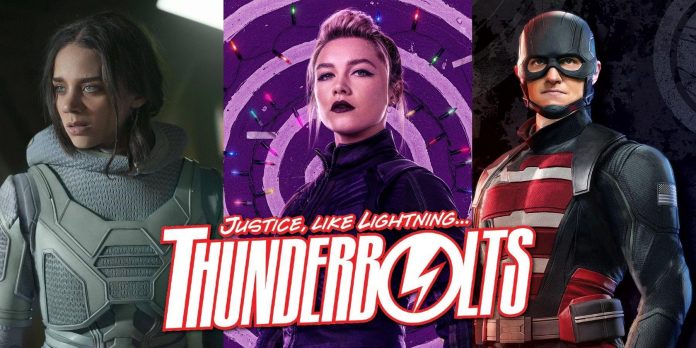 The new kid on the block, known as Marvel Studios’ Thunderbolts, is causing a storm of speculation among the fandom. Attracting viewers with the potential of a villain movie, it seems like it’s just a shake-up needed to keep the Marvel cinematic universe fresh. But interested people still don’t quite know what to expect.

That’s where the fan artists come in. When “Thunderbolts” was announced with director Jake Schreier, even this information was enough to intrigue fans of Schreier’s works, such as the curious Robot and Frank. But the comics that inspired him to make the film quickly sparked fascinating discussions among fans, especially given that some of the characters were already teased as potential stars for the film. Therefore, some of the most creative people decided to direct these assumptions into the visual environment.

RELATED: Marvel’s Thunderbolts: The 8 Most Powerful Members of Comics, Ranking

Digital artist Rahal Nejraoui was one of the fastest to act. Using various Marvel characters who were supposed to be part of a potential list of Thunderbolts, they created a pretty convincing theoretical poster for the film. Fans will quickly recognize Wyatt Russell as John Walker/US agent, whose return after appearing in the Disney Plus series “The Falcon and the Winter Soldier” was pretty much teased. But others in the artwork should easily cause the same excitement.

The eclectic team of potential antiheroes also includes Taskmaster and Elena Belova from Black Widow, The Ghost from Ant-Man and the Wasp, The Abomination from The Incredible Hulk and the upcoming Hulk Woman: Sworn Lawyer, as well as Bucky Barnes and Baron. Zemo was last seen in The Falcon and the Winter Soldier. Of course, it’s an eclectic group, and even if only half of them end up in the movie, it’s sure to be pretty damn exciting. At the very least, maybe Baron Zemo will throw another dance party.

The Thunderbolts comics tell about a team of reformed supervillains, originally created by Baron Zemo as a clearly less than useful group. Many fans probably guessed that an MCU adaptation was coming when Julia Louis-Dreyfus’ Valentina Allegra de Fontaine began recruiting characters such as the disgraced John Walker in The Falcon and the Winter Soldier and Elena in Black Widow. It doesn’t take much imagination to see the similarities between “Thunderbolts” and “Suicide Squad” of the District of Columbia, which tells about a team of supervillains forced to do heroic dirty work. But in the case of The Thunderbolts, it seems that the participation of the characters is much more voluntary.

At least it looks like John Walker and Elena Belova are almost confirmed for the team. But the rest of Nejraoui’s choices also seem like a pretty good choice. Most likely, there will be more news about the official list of “Thunderbolts” soon, so we hope that it is close to the same hype as this fan art.

Thunderbolts is in development at Marvel Studios.