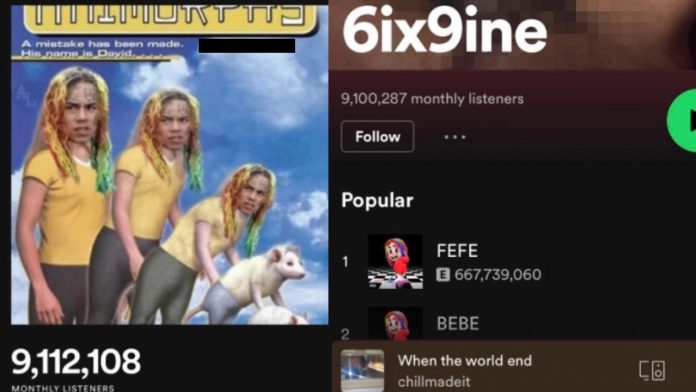 6ix9ine: The Spotify account of world-famous Rapper Tekashi 6ix9ine, whose real name is Daniel Hernandez, was taken over by people whose identity is not yet known. After the attackers changed Tekashi’s biography, he put genitalia in his profile picture, which garnered a great reaction. 6ix9ine (six nine), who entered the music industry in 2014, managed to attract attention with his aggressive rap music style. The famous rapper, who has gained a large fan base since then, has been on the agenda for a long time with his polemics with both his fans and famous names such as Jake Paul.

6ix9ine, who was challenged by Jake Paul for a boxing match, lost his Spotify account to a hacker who clearly hated him after his tense days. The hacker, whose identity has not yet been revealed, included profanity in the biography of the famous rapper, and changed his profile picture with a male genitalia.

The photos on the profile became the subject of ridicule

The person who hacked 6ix9ine’s Spotify account replaced the famous rapper’s biography with profanity and derogatory words, and also featured images of male genitalia in profile and cover photos. The famous rapper managed to get his account back after the incident and restored his profile.

Billie Eilish received advice on how to cope with the “pressure”...