Home Entertainment Fallout Power Armor is one of the most distinctive features of the... 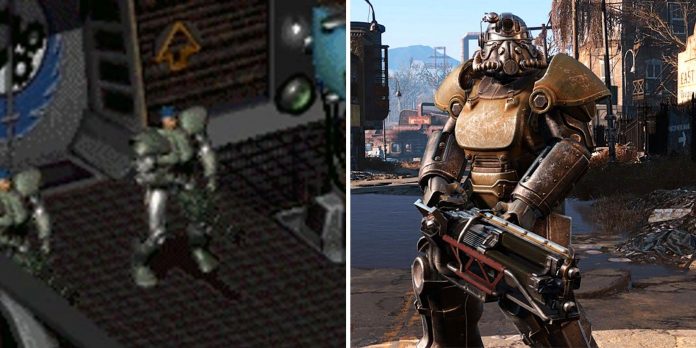 Power armor is one of the main elements of the long—standing Fallout series. Power armor, known for its easily recognizable appearance and extreme utility in the gameplay, is a sought-after item in any part of the franchise. This is not surprising, given its value both before and after the war.

Thus, Power Armor became a symbol of Fallout. Throughout the series, it has undergone many changes, and many new models and mechanics have been added to each new game. However, it still retains its classic look and practicality.

A Brief History of Power Armor in the Fallout Universe

The power armor in the Fallout universe was first manufactured in the United States before the Great War. These suits were designed to protect their wearer, but at the same time provided mobility and the ability to use heavy artillery relatively easily. In 2067, West Tek Corporation released the first set of T-45 power armor. The company then continued production of the T-51 in 2076 and the T-60 in 2077. However, production stopped abruptly when the bombs fell.

However, other, less well-known models were also available, such as the T-65 power armor, which was supplied only to the US Secret Service. There were also prototypes of unfinished X-01 models — the drawings of which fell into the hands of Fallout’s Enclave. This model was supposed to be the first part of a new generation of advanced power armor.

In the post-war period, few Fallout organizations had the resources to manufacture their own power armor, so production was practically stopped. However, the Enclave managed to create its own models, namely the Advanced Power Armor Mark I and II. Meanwhile, the raiders and other inhabitants of the wasteland began to dismantle the old parts of the power armor to create shoddy entertainment.

The basis of the Fallout franchise

Since power armor existed even before the Great Fallout War, the player can find models in every game of the franchise. It’s interesting to see how much the concept has changed since the release of the first part, thanks to the huge number of new options added to the franchise.

For example, a native of the Fallout Shelter can get a set of T-51b power armor in several ways. Fans should note that in the game it is usually labeled as “Power Armor”. Then they can strengthen the suit, increasing its protective capabilities, and rename the item to “Enhanced Power Armor”. Fallout 2 adds to this, because in addition to the potential acquisition of Power Armor, the Chosen One can also find Advanced Power Armor Mark I or II kits — post-war Power Armor variants of the Enclave.

Finally, Fallout 4 and Fallout 76 have added even more models to the series. In Fallout 4, the T-60 power armor has been added, as well as the rare X-01 power armor created after the war. Meanwhile, Fallout 76 has added much more, from new universal models like the T-65 to older ones that have been heavily modified, such as the Ultracite power armor set and the excavator suit.

Changes in the game mechanics of Fallout Power Armor

Anyway, this proves that power armor won’t disappear anytime soon in the Fallout franchise. In addition to aesthetics and utility, this has become an integral aspect of the series. We can say that this is part of what makes the game called Fallout. However, despite its iconic nature, the mechanics associated with power armor have been fairly criticized, especially with its iteration in Fallout 4.

From Fallout to Fallout: New Vegas, Power Armor was treated as a late acquisition. The player could only get it if he defeated a powerful enemy or thoroughly explored the game world. In short, finding him shouldn’t have been easy. Fallout 3 and New Vegas even blocked the use of power armor for a special Fallout perk — power armor training. If the player did not learn about this perk from the NPC, he will not be able to use power armor during the passage.

Fallout 4 made huge changes to this tradition, which was then moved to Fallout 76. He provided the player with a set of T-45 power armor right at the beginning of the game, during the Fallout quest “When Freedom Calls”. It also increased the number of suits that could be found in the wasteland, which inevitably made power armor not so much a super-powered tool as an ordinary armor or, even worse, a simple collectible.