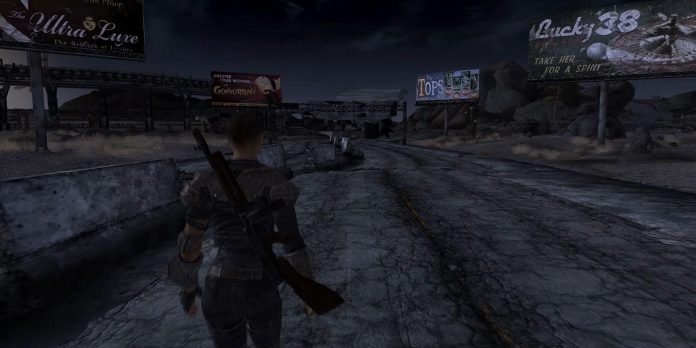 When Fallout: New Vegas came out in the second half of 2010, I didn’t like it too much. Although today it is a cult classic in the open world genre, it was thrown out the door shortly after Fallout 3 and contained quite a lot of bugs. However, over time, he became a famous part of the post-apocalyptic franchise, and his general scenario deserves special attention. More than a decade later, fans are still returning to the Mojave Wasteland, and the addition of mods helps keep the game in the spotlight.

According to DSO Gaming, the cgy95 modder recently released a special add-on for Fallout: New Vegas called “Race to the Bottom”, and it sounds pretty promising. Described as a “medium-sized” mod, its duration is estimated to be about two hours, about the same size as the “Automatron” DLC for Fallout 4, released in 2016. In the cgy95 project, players are tasked with tracking down robbers while exploring. a new dungeon. The most impressive thing about this mod is that it is fully voiced and contains several new characters.

This is impressive for a free add-on. There are many interesting Fallout mods: New Vegas, for example, the one that finally allows fans to become a real courier. However, not many have their own voice acting. On top of that, “Race to the Bottom” provides the player with several ways to solve problems in order to complete the quest. It’s even possible to make a run without killing, although since NPCs aren’t “necessary”, it looks like those who are a bit more bloodthirsty might even do the opposite. Overall, it sounds like an ambitious mod.

Speaking of ambition, the demo version of Fallout 4 “Fallout London” was released recently. This addition is a really interesting addition to the 2015 game and turns the capital of England into a wasteland. It also comes with new factions and weapons. In other words, the Fallout modder community is alive and well and produces a lot of great content.

As for the release of 2010, New Vegas is considered one of the best Fallout games that have seen the light. The previously mentioned writing helps him stand out, not to mention the decision to pay more attention to role-playing games compared to his predecessor. There were hopes for a sequel or maybe even a remake, but at least for now, fans can get more out of the Mojave Wasteland with a treasure trove of custom mods.

To continue growing: PlayStation would be preparing the purchase of more...