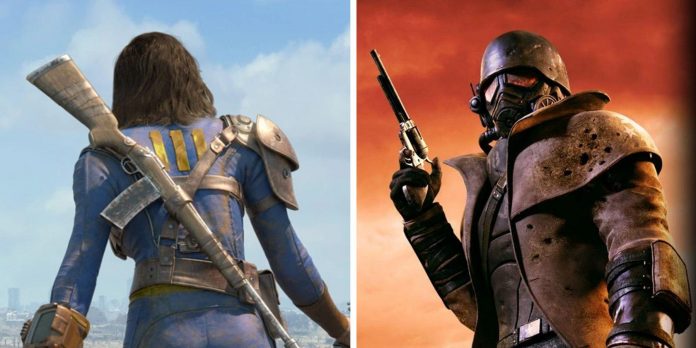 The Fallout series has changed a lot throughout the years. There have been major alterations to its overall gameplay, its style of storytelling, and its role-playing elements. Now, with Fallout 5 confirmed, Bethesda would do well to consider what among these changes should be carried over to the next entry in the franchise.

Now, when theorizing what Fallout 5 might be like, it’s worth looking back at the most recent single-player titles in the Fallout series. In this case, it’s Fallout 4 and Fallout: New Vegas. Combining the best bits of both would arguably make for an excellent game.

RELATED: Fallout Mods May be All Fans Get Over The Next Few Years

The Role-playing and Player Choice in Fallout: New Vegas

Fallout: New Vegas is often lauded as the best in the franchise, primarily because of its emphasis on role-playing elements. In the main questline, players get to meet different factions fighting for control over Hoover Dam, and they can choose to side with whichever group they wish. However, deciding to support one faction over the others has consequences that are felt for the rest of the playthrough. These range from being met with hostility upon approaching faction members to being locked out of story quests.

This makes the game more similar to Fallout and Fallout 2 even with the drastic change in gameplay. It places emphasis on choice, making the player feel that their decisions matter. It also ups Fallout: New Vegas’ replayability as many players would want to see how the factions’ questlines differ. Though even without the quests factored in, the factions hold interesting beliefs and motivations, as well as some memorable characters — Benny, Caesar, and Mr. House, to name a few.

However, Fallout: New Vegas was always held back by its bugs. Players have always complained about the loading fails, save file corruptions, asset issues, and more. It’s a shame because these issues detract from the game’s excellent world and storytelling. Though there are plenty of mod fixes available, it’d still be better if these weren’t necessary to experience Fallout: New Vegas optimally.

RELATED: Starfield Should Use and Improve Fallout’s Power Armor

The New and Improved Systems of Fallout 4

As for Fallout 4, it’s the most divisive single-player entry in the franchise, and that’s due to the huge shift in the game’s direction. For one, longtime fans disliked the addition of a voiced protagonist in a Fallout game as well as the restrictive new dialogue system. These new features made it difficult for people to role-play as their character. Not to mention, the dialogue options displayed often didn’t match what the protagonist ended up saying.

Still, the biggest letdown with Fallout 4 was its lackluster story, which hinged primarily on the game’s factions. While players could choose to side with different factions, their questlines and eventual endings were pretty much the same. Additionally, the factions weren’t given the same depth as the ones in Fallout: New Vegas, making them pale in comparison. The Institute, in particular, was terribly written as the supposed “bogeyman of the Commonwealth” was never given believable goals and motivations to justify its wrongdoings.

However, there are plenty of things that Fallout 4 got right. Combat as a whole is a step-up with better gunplay, weapon modding, and armor customization. The new Power Armor suits also look and feel great, but perhaps it’d be better to make Power Armor harder to come by in Fallout 5. This would maximize its utility and value in the eyes of the player. Settlement building was also a great addition, especially since it’s mostly optional.

Further, Fallout 4’s companions were no doubt some of the most interesting in the franchise, and it’s thanks to their intriguing backstories. The inclusion of optional romances was also a plus. Overall, the tweaks to the old gameplay systems were what made Fallout 4 shine.

Putting It All Together in Fallout 5

All that said, Fallout 5 should note the best parts of Fallout: New Vegas and Fallout 4, then put them together. Taking New Vegas’ factions and role-playing elements, then putting them in a game world with Fallout 4’s improved systems would jive exceptionally well.

Imagine traversing a wasteland divided between multiple factions — each with a good reason to oppose the others. Now, imagine going through all of it with a follower who is an interesting character in their own right. As the player’s relationship with their companion grows, they’ll reveal more about their life in the post-apocalyptic world. They’ll also have plenty to say about the player’s actions — be it in a major Fallout quest or a miscellaneous errand.

As for Fallout 5’s main questline, it should be a compelling story with routes and different endings. Players should also be able to progress through different means. For example, the protagonist could smooth-talk their way out of a confrontation or simply brawl their way to the next stage of the quest. Moreover, if the player completes the game with one faction, then their next playthrough with another faction should provide a different perspective of the overarching story. This puts weight on player choice, while also building on each side’s lore.

Finally, the vast game world should be filled with interesting locations — some of which can be converted into settlements, should the player choose to. Traversing the world should be an enjoyable experience, with smooth combat mechanics and, ideally, no game-breaking Fallout bugs. Of course, no game is without its bugs, but those that do end up in the final product shouldn’t detract from the overall experience — or worse, prevent the player from moving forward altogether.

This mishmash of the right features and mechanics would make for an excellent entry to the Fallout franchise. That said, Fallout 5 is still years away since Bethesda has Starfield and The Elder Scrolls 6 lined up. Even then, it’s fun to theorize what the next installment might bring, especially when considering past entries. Whether Bethesda implements these elements is up to the development team, however. All the community can really do is wait and hope.

Fallout 5 is currently in development.