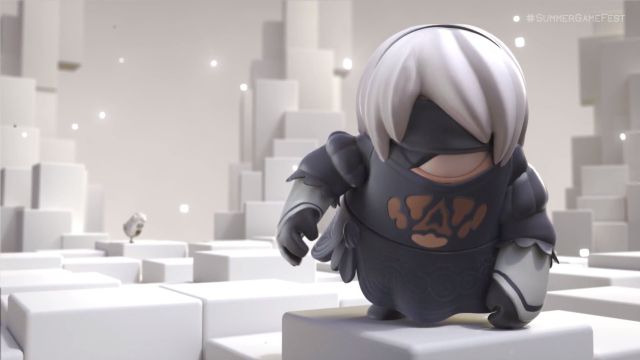 Fall Guys: Ultimate Knockout: The new collaboration is with the title of Square Enix and Platinum Games, so the character joins the battle royale. On the virtual stage of the Summer Game Fest 2021 we have been able to discover what is the next collaboration of Mediatonic in Fall Guys: Ultimate Knockout, a crazy multiplayer title that invites players to compete in intense tests in which only one can survive. The new skin will be 2B, a character from NieR: Automata, which we have seen in action through a trailer, which you can see in this news.

Those who want to put themselves in the shoes of this peculiar version of B2 will not have to wait long. It will be from June 18 when it is available.

Geoff Keighley already let him glimpse in his tweets and videos, the two great winners of 2020 were going to have their moment at the Summer Game Fest 2021. In just a few months, things have changed a lot for Mediatonic. The blazing triumph of Fall Guys: Ultimate Knockout, which was the game of the summer, has put them on the front page. However, the numbers have been deflating as the months have passed. Be that as it may, Epic Games has moved tab and has acquired the studio, so it will handle the intellectual property from now on.

Mediatonic’s plan is to continue nurturing content to its video game, which has already reached season 4, set in the future. After implementing cross-play, the developer will focus on providing even more content, as well as releasing the Xbox One, Xbox Series X, Xbox Series S, and Nintendo Switch version. The title was scheduled for summer on these platforms, but the company has acknowledged that they did not measure the times well and that they will need more work before they can publish it.

Circumstances are also very different for Innersloth, the small independent studio behind Among Us. Although the game was available on Android and iOS since 2016, the truth is that the formula caught on last year. Since that time, the developer has gone from announcing a sequel to later rectifying, since instead they will focus their attention on expanding and improving this first installment, which has already seen the light on PC, Android, iOS and Nintendo Switch. The game will also be released on Xbox One, Xbox Series X, Xbox Series S, PS4, and PS5.

Top 5: Games that will make you feel like James Bond