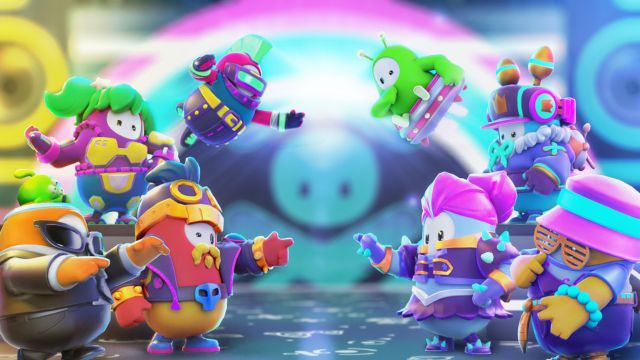 Fall Guys: Ultimate Knockout, The Mediatonic title receives the mid-season update (4.5), with new content for all players.The party is not over yet. Fall Guys: Ultimate Knockout continues with its roadmap, which has now rolled out its fourth season. Mediatonic’s battle royale has embraced a futuristic setting in its latest content, which will continue until Season 5 is released. On this occasion, the developer has released the mid-season patch, that is, 4.5. Among the new features available is one of the most demanded features, nothing more and nothing less than cross-play.

From now on, it is possible to access custom lobbies that allow PS4 and PC players to gather in the same room. A new functionality is also added to report players, although Mediatonic ensures that it will not work exclusively based on what users report. And what about the content? New round variations, low-gravity versions of Hex-a-gone and Thin Ice, as well as two new rounds (The Slimescraper and Button Bashers). Below you can see the official trailer:

Delayed on Nintendo Switch and Xbox

Mediatonic recently announced that Fall Guys would also come to Nintendo Switch, Xbox One, Xbox Series X and Xbox Series S. The initial idea was to launch these versions in summer, but the developer has modified its calendar. Although he has not revealed a new date, he has explained the reasons for this delay. According to their words, after integrating into Epic Games, they have realized that they had been hasty in setting the release date. Among its plans is the introduction of new features.

Fall Guys: Ultimate Knockout was released in Summer 2020 for PS4 and PC. The title quickly became a phenomenon, even before Among Us began to emerge. Since then, the furor has fallen, but not the ambitions of Mediatonic, now under the umbrella of the creators of Fortnite.

Kanye West, Who Recently Lost Millions Due to Adidas, Now Has...