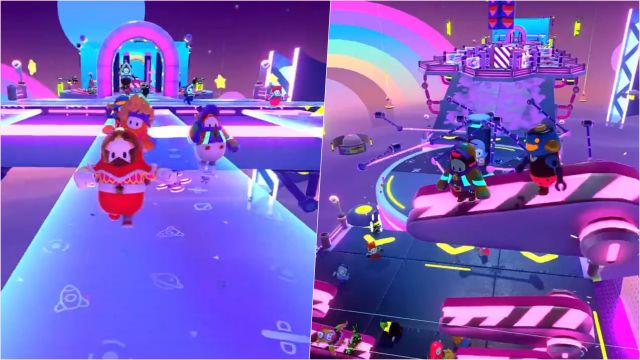 Fall Guys Season 4 will add 7 new levels to the success of Mediatonic. The company shows the first of them: this is Skyline Stumble.

Fall Guys shows the first level of the seven that will add its Season 4 launch. Although we still do not know the date, Mediatonic anticipates the playable elements that will accompany the futuristic theme of this content framework: this is Skyline Stumble.

As you can see in the tweet under this paragraph, 60 players will try to survive on this route full of surprises… and traps. We can expect “low gravity zones, force fields, changing light panels” and much more. The level is quite challenging for what we are used to in recent months.

The final stretch is made up of a labyrinth in which we must activate the locked doors with a switch. Not being alone, you will have to deal with the times alongside the rivals, who huddle around the button. Once past, the final stretch is made up of a vertical wall filled with pinball-style levers. It seems that this part will be the shortcut area to the goal, since on the left part we see a ladder embedded within a column of zero gravity.

Fall Guys Season 4, What Do We Know?

We knew the logo of Season 4 on February 23: Fall Guys 4041. So far we did not know anything else, except the video of this news. We know that the team’s plans are to take the game beyond PS4 and PC, the platforms on which it was released from day one.

In fact, its next appearance on Xbox One, Xbox Series X | S and Nintendo Switch is confirmed sometime this summer. What will not happen is its arrival on Xbox Game Pass, which the publisher, Devolver Digital, ruled out at the outset. Nor can we forget that Epic Games bought the Tonic Games group, which will boost the bet on the game over the months.

FIFA 22: They Simulate The Eleven of PSG After The Arrival...