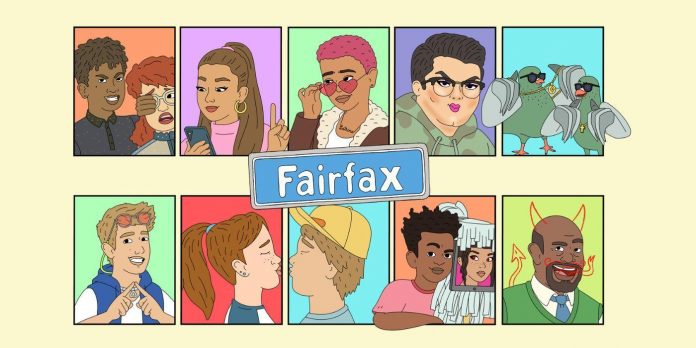 Amazon Prime announced the return of Fairfax on June 10. The animated comedy tells about four schoolchildren who are chasing influence. The gang endures all this: first kisses, difficulties with adjustment, breaking friendship, obtaining (and maintaining) the status of an influential person, and much more.

The show debuted on the streamer on October 29, 2021 and received an order for two seasons. It received critical acclaim, scoring an average of 80% on Rotten Tomatoes. The debut season was highly praised for its warm tone, cute characters and originality — immersion in the dark trenches of the online world. After the release of the first season, we talked to the lead actors Gizondo and Clemons, who play Dale and Derika, respectively. Clemons explained that the show, while hilarious and filled with jokes, confusing jargon and a lot of laughter, goes beyond the surface.

Speaking of her heroine’s journey. She shared: “It’s a wonderful journey. It’s a journey of her sexuality and [discovering] who she is and what it means; and it’s a journey to find out that her friends will be there for her in really difficult times and how much they cover for each other. You can see her growing up [during] this really important year of her life, and it’s really cool.”

Fairfax is created and produced by Matthew Housefather, Aaron Buxbaum and Teddy Riley with executive producers John Zimelis, Jason W. Nadler, Peter A. Knight (Bojack Horse), Chris Prinoski, Ben Kalina and Antonio Canobbio. Somehoodlum has developed the characters for the series and acts as a consulting producer together with the Pizzaslime media brand. There will be eight new episodes in the second season; see episode titles and descriptions below.

Upon learning that Principal Weston has died, Fairfax High School competes to see who can grieve the most.

The Circle of Hype (Season 2, episode 3)

Avon corner under threat – h*rt! I mean, Banda Banda introduces Dale to the mystical ecosystem that is the Fairfax Flea Market. Benny gets pulled into Shady’s side, Truman joins Trini’s group of moms, and Derika finds the perfect jacket.

Coach Taylor’s job as the Dillon Panthers is at stake—damn it. Which one is it again? Fairfax? Oh right. It’s career day! Derika enjoys a rapid rise in Girlbossier only to find out that her dream of becoming an activist model has a catch. And Truman is reunited with a piquant old hobby.

Wrongfully accused Derika ends up in prison and eventually proves her innocence, making new friends along the way. Meanwhile, Truman is risking his legacy to make a video about fire safety.

The beach day Dale was hoping for is postponed when the Gang Gang tries to save Hiroki from the infamous Clout 9.

Walt and Jesse are at odds with Gus. Meanwhile, the Gang Gang is going to a high school dance! Truman stirs the pot, bringing the fifth wheel.

It’s the season finale! We don’t mess up shit.

The second season of Fairfax will premiere on June 10 on Amazon Prime.