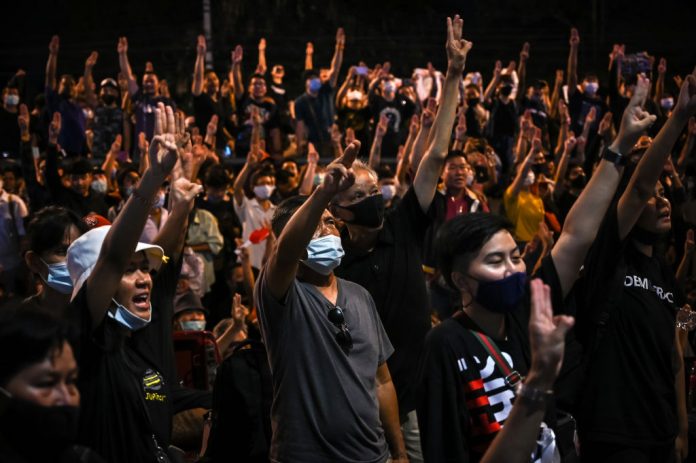 More than a thousand people from the opposition groups that organized a demonstration demanding the constitutional reform in the country and the resignation of Prime Minister Prayut Çan-oça gathered in the capital, Bangkok.

The demonstrators, carrying posters and banners, reacted to the failure to release 4 opposition leaders previously detained by the police.

While police intervened with tear gas to detain 10 people, protesters concentrated around the Pathumwan Police Station in the city.

After the protest, which ended at 21:00 local time, the police released the 10 people they detained.

The persons in question, whose request to be released on bail were rejected, were accused by prosecutors of “lese majeste” (insulting the King), Article 112 of the Criminal Code.

23 people sued for insulting the monarchy last yearArticle 112 of the penal code, which stipulates heavy prison sentences of up to 15 years for those who criticize the King of Thailand and the monarchy, is being discussed in the country.In a statement made by the Thai Lawyers Association for Human Rights, it was stated that 23 protesters complained to the police for insulting the monarchy throughout 2020.In the statement, which stated that the law in question had not been used for the last 3 years, it was emphasized that the number of charges in 2020 was “the highest number in recent years”.

In October 2020, Thai Prime Minister Prayut Chan-oça responded positively to some of the protesters’ demands and announced that the regulation allowing Senate members appointed by the government to participate in the prime minister’s vote in the parliament after the general elections will be removed.

In politics, different opposition groups opposing the pressures of military tutelage and the monarchy demand the resignation of the military junta government, which maintains its power thanks to its constitutional changes, the constitutional reform for fair elections, and the immunity of the monarchy to be lifted and subordinated to the rule of law.