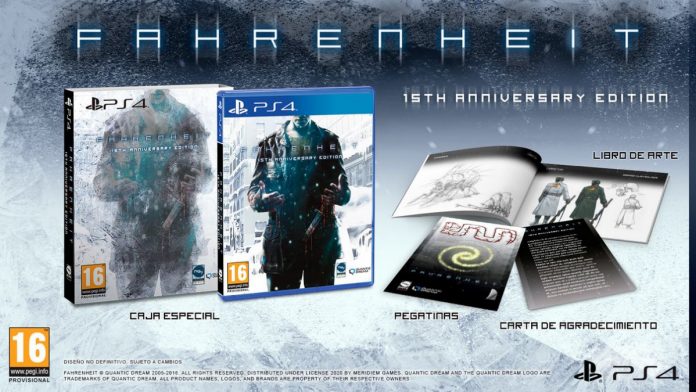 The game that catapulted Quantic Dream and David Cage to fame will have a special edition commemorating the 15 years since its release.

Meridiem Games has confirmed through a press release that Fahrenheit: 15th Anniversary Edition will go on sale on January 26, 2021 at a price of 29.99 euros. In addition, the game already has its reservations open on Amazon, Fnac, Game, Media Markt and Xtralife. Announced in September of last year, this Collector’s Edition includes the following:

A special box commemorating the 15th anniversary with an alternative cover.
A copy of the game for PS4.
A set of stickers created especially for the occasion.
A thank you letter from Quantic Dream.
An art book of the game with all kinds of sketches of its development.

What is Fahrenheit about?

Fahrenheit, from 2005, is the second game by David Cage and his studio, Quantic Dream, with which he had previously made The Nomad Soul (from 1999). However, it was this second second project that catapulted them to fame and allowed them to reach several exclusive agreements with Sony to develop the adventures that we would end up knowing by the names of Heavy Rain, Beyond: Two Souls and Detroit: Become. Human (all of them also available on PC since last year, after the breakup between Quantic Dream and Sony). Fahrenheit has the hallmarks of these and is another adventure focused on narrative, with a script that earned him several awards and recognitions. It is an interactive thriller with paranormal overtones that tells the story of a series of murders in New York City that are being committed by ordinary people who are possessed intermittently. As one of those unfortunate executors, our mission is to unravel the mystery by investigating and making decisions that could completely change the course of history.

The normal version has been available on the PlayStation Store since 2017 and has the same features expected from this Fahrenheit: 15th Anniversary Edition. In other words, it will work at 1080p, it will have support for trophies and will allow remote play, live broadcasts, game sharing and even make use of a second screen.

Watch the trailer for Clarice: Silence of the Lambs