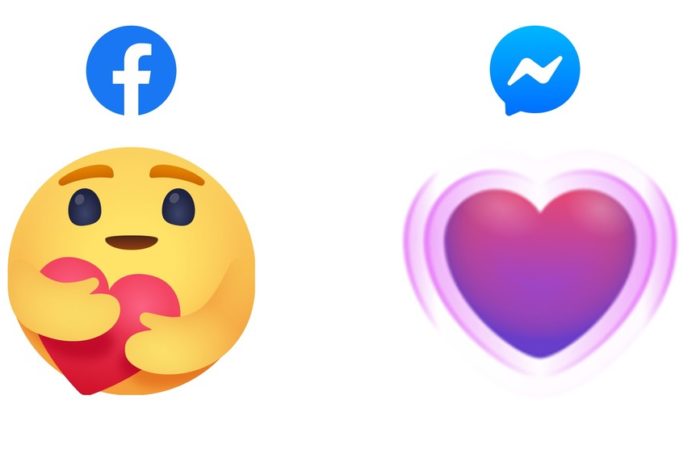 New “Force” emojis can be used during quarantine on computer and mobile phone.

The Facebook launched two new options reactions to use the social network and the Messenger in your mobile app or computer. The expressions, announced on Friday (17), are called “Care”, or “Force”, in the Brazilian version, with a sense of affection and attention. On Facebook, the drawing shows a yellow face hugging a heart, while on Messenger the image is represented by a pulsating purple heart. The new interactions were created to bring people together and express empathy and compassion during the coronavirus quarantine.

The new reaction from Facebook will be available to all users next week, while the Messenger option can already be used starting this Friday (17). To find what’s new in the messaging app, you need to press the red heart reaction, causing a balloon to indicate the availability of the new animated purple heart. The reactions can be used in publications, comments, images, videos, chats or other content within the social network.

“We hope that these reactions will give people additional ways to show their support during the Covid-19 crisis. We know that this is an uncertain time, and we wanted people to be able to show their support so that their friends and family knew they were thinking about them, ”explained Facebook spokesman Alexandru Voica, via Twitter .

This is not the first time that Facebook has changed the reaction emojis. The first action took place on Mother’s Day 2016, when Flor Roxa da Gratidão was added to the reactions and became a fever on the social network. The following year, the rainbow flag symbol of the LGBTQ movement emerged as an option among the reactions in celebration of the LGBTQ Pride month.

Facebook has been working on several features on its platform during the coronavirus pandemic. A new section on Covid-19 has been added to the mobile application, called “Coronavirus – Information Center”, available in the main settings menu. There, it is possible to find updated numbers, news about cases of the disease in several countries, indications of official profiles of health organizations, as well as tips to face isolation.

In the coming weeks, the platform will begin to notify users who are enjoying, reacting or commenting on publications with false information about Covid-19, and will instead offer links to official information from the World Health Organization about the disease. In addition, posts that contain misinformation about the pandemic are being removed from Facebook and Instagram .

In early April, the company also launched its own desktop Messenger program. The application was announced with the objective of bringing people together during quarantine, since through chats it is possible to make individual and group video calls. Conversations offer several features of the Web version, such as dark mode, use of GIFs, among others. Messenger for PC is available for Windows and macOS .