Home News Facebook Hasn’t Closed The Humiliating Page Opened By The Name Of A... 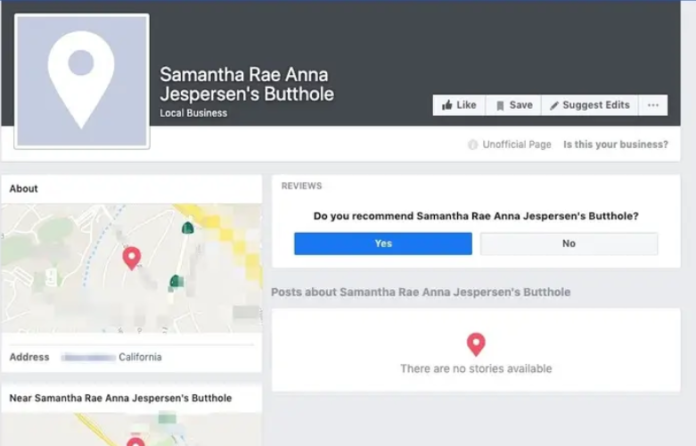 A woman named Samantha Jespersen living in the USA was shocked when she searched her name on the Internet in 2015. Jespersen encountered a Facebook business page titled “Samantha Rae Anna Jespersen’s Butt”. Samantha Jespersen has been trying to close the humiliating page for years.

23-year-old Samantha Jespersen had to struggle for years with one of the worst of the cruel behavior that the Internet could face. When Samantha searched her name online in 2015, Samantha Rae encountered a Facebook business page called Anna Jespersen’s Butthole.

The page titled “Samantha Rae Anna Jespersen’s Butt” was founded in 2012 when Jespersen was 15 years old. Now 23 years old, the woman does not know who and why the page was created. Jespersen says the page itself or a acquaintance did not open it.

“This unofficial page was created because people on Facebook were interested in this place and the business,” said the explanation of the page opened on behalf of Samantha Jespersen. “Samantha Rae is not affiliated with anyone associated with Anna Jespersen’s Butt and is not approved.” No sharing has been made on the business page opened on behalf of the young woman until this time.

There is not exactly a street number in the address section of the page opened as a business page. However, the cursor used to mark the address on the map shows the house where Jespersen and his family used to live.

The controversial Facebook page looks like this
Samantha Jespersen reacted to Facebook because the page was not closed. Jespersen has been trying to close the page since it found the page in 2015. However, Facebook did not close the page, reporting that it did not violate the rules of the page.

Jespersen voiced the issue on Reddit as he tried to make his voice heard for the page to be closed. Some Reddit users, who saw the news of Jespersen, started to open similar pages with their friends’ names.

The 23-year-old woman says the page has had no major impact on her own life so far. But the realization of such a possibility in the future worried Jespersen. Fortunately, Samantha Jespersen’s struggle against her page ended with Facebook closing the page recently.