Donald Trump’s posts that were posted on Twitter with disinformation alerts also had an effect on Facebook. After failing to respond at the same level, company officials have revolted against the refusal of Facebook CEO Mark Zuckerberg to take action against speeches by the president of the United States.

On Tuesday, Twitter included fact-checking links in President Trump’s tweets. On Friday, he made publications that were marked by the social network as content that incites violence. On Facebook, the same post was made, but no action was taken.

Zuckerberg said that, regarding the recent speeches of the US president, he disagrees with the interpretation of Facebook. He said the post did not violate his platform’s policies and would not be removed. 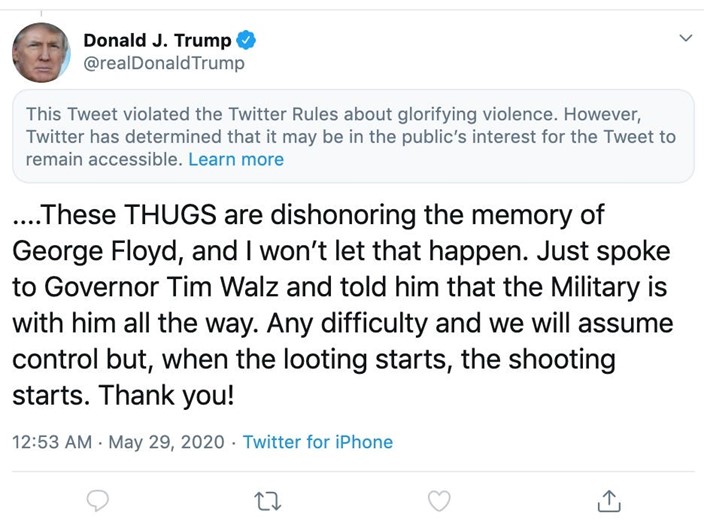 He still said he disagreed with the president, but “that people should be able to see this for themselves”. In one of the publications, Trump said, “When the looting begins, the shootings begin.” Speech is seen as a declaration of war on criminals, including death as an appropriate way to deal with them. Trump denied this in the message.

With that, Facebook employees revolted at Zuckerberg’s refusal to act against Trump’s lines. On social media, they have shown discontent with the boss’s stance.

“Mark is wrong, and I’m going to try as loudly as possible to change his mind,” wrote Facebook News director of product design Ryan Freitas.

Mark is wrong, and I will endeavor in the loudest possible way to change his mind.

Andrew Crow, head of design for the Portal, said on Twitter that a platform should not spread misinformation and also disagreed with the CEO. “It is unacceptable to offer a platform to incite violence or spread disinformation, regardless of who you are or whether you are worthy of news,” he said. “I disagree with Mark’s position and I will work to make the change happen,” he added.

Also on Twitter, Jason Stirman, a member of the research and development team, also disagrees with Mark’s stance and says: “I am not alone within FB. There is no neutral position on racism”.

“I am an FB employee who completely disagrees with Mark’s decision to do nothing about Trump’s recent posts, which clearly incite violence,” wrote Stirman.

Last Sunday (31), Zuckerberg announced that Facebook will donate US $ 10 million “to groups that work with racial justice”. He said the company has been speaking with civil rights consultants and officials “to identify organizations locally and nationally that could use this most effectively at the moment”.

Huawei new camera patent will be much talked about