Home Entertainment Eyes in the Dark: The Curious Case of One Interview with Victoria... 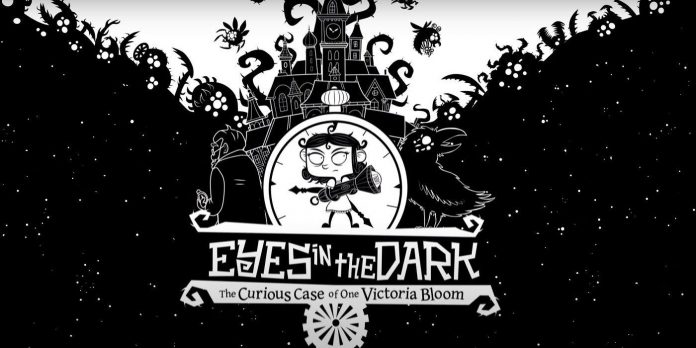 Soon players will be able to fight the darkness in Eyes in the Dark: The Curious Case of One Victoria Bloom, a recently announced indie game developed by Under The Stairs and published by Gearbox Publishing. Players will take on the role of Victoria, a young girl trying to find her grandfather, and embark on a dangerous adventure in a large family mansion shrouded in darkness. The artistic style of Eyes in the Dark is similar to the Don’t Starve series, combining 2D illustrations with black and white colors for a unique fantasy adventure.

Eyes in the Dark: The Curious Case of One Victoria Bloom turns the player’s light source into a weapon as he explores the numerous rooms of his family’s mansion. Using a flashlight and a slingshot, players must fight with silhouettes of monsters created from the darkness, find hidden secrets and beware of the eyes constantly watching them. In addition, players can upgrade the bulbs of their flashlight to create new effects, and use numerous light projectiles in the slingshot to inflict light damage to enemies. The unique combat system is likely to appeal to fans of Hollow Knight with its dynamic action and important improvements for the narrative.

What inspired you to create such a unique game? How did you start creating Victoria and what decisions did you make at an early stage of development to create this character?

Filip Neduk: In fact, the game started as a gamejam. It was a five-day game jam, but I didn’t participate then. I was on another team, and we got an award for the best art. Later we got together, and when we decided to make a game, he put me down and said I could do whatever I wanted.

But they had the concept of a black-and-white game. The only thing that was in the gamejam was black and white and a little girl as the main character.

That’s about how we met for the first time. I used to play board games and still do. First of all, I’m a board game designer, and I dabble in art. I’m really not too keen on it; I’m more interested in game design. He wanted it to be an artist, and I said, “But I’m also a game designer,” so he left me.

I started drawing, and I had two little ideas: black and white and a girl. “What can I confuse with this?” There was the idea of this mansion and her coming into this darkness, because you already had light with darkness. That’s kind of the origin of it. The first concept art was actually Victoria herself, holding a flashlight and cutting out the darkness with her light. And in fact, this concept art is what the game looks like now – from the first time. It wasn’t later. Everyone really liked this concept art, and we started building with it.

This premise was so strong that it was actually implemented.

Philip Neduk: When I first drew it, I really liked the idea of a girl with a big head and a giant flashlight. The idea that you are fighting this insane darkness with a household item really, really surprises me.

It evokes such a primal response. Who wasn’t afraid of the dark at that age? You guys have turned into tangible monsters things that we were all nervous about.

Philip Neduk: I liked memories as a weapon, because everyone who ever held a flashlight in their hands as a child used it as a lightsaber. That’s it! Instinctively it’s a weapon, and it’s a weapon against the darkness, because you want to see where you want to go. So it also coincided. You have this child who has a huge thing that will protect her.

My initial reaction when I saw the trailer, and then when I looked at some concept art, was that it was a tangible remake: “I need to drink water in the middle of the night, but there may be something under the bed.” What design processes have you used to create creatures created from darkness? They seem almost cute, and then you look at them more closely and say, “This will eat you up.”

Philip Neduk: This is an interesting question because we are a very small studio. When we started, there were three of us, and none of us knew how to animate anything. When I designed the mounters, I wanted to make them simple, because all the graphics are just a silhouette of darkness.

Pokémon Scarlet & Violet: Pros and cons of the exclusive Champion...