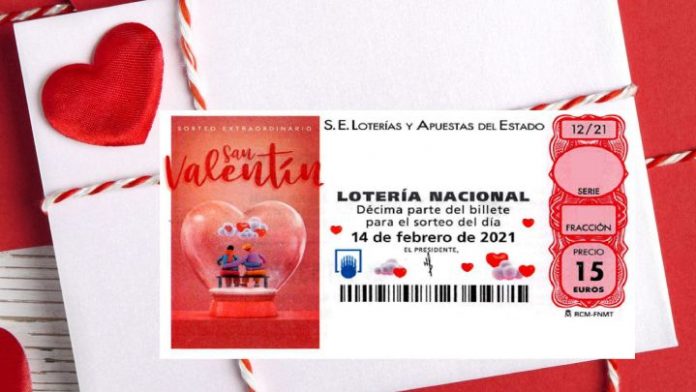 After starting the year with the traditional draw for the Child, the next big date in the Spanish lottery is precisely the one that is about to arrive, on February 14 or Valentine’s Day. The festival itself is next Tuesday, but the National Lottery celebrates its Extraordinary Valentine’s Draw the weekend before, today Saturday, so if you have played a participation and want to know if it has touched you, here are the websites and apps with which to check it for when the draw takes place.

With an issue consisting of 10 series of 100,000 tickets with a prize of € 150 each and divided into tenths with a price of € 15, the total that the Valentine’s Day draw will distribute will be 70% of the circulation, which is equivalent about € 105 million in prizes. But like any great raffle, there is a special accumulated prize of no less than € 15 million that will be awarded to a single lucky person. The first prize consists of € 1,300,000 per series, and the second of € 250,000 per series.

The first and best place to go is of course the official website of the National Lottery. Here you have the direct link with which to check just by entering the coupon number if we have been one of the lucky ones or not. Without a doubt the most trustworthy site since it is the official one and therefore the first to be updated with the result.

The second most reliable option is to have the official State Lottery and Betting app installed on your mobile, which is updated like the web instantly once the different winning combinations appear until the special prize is reached.

Free to download and available for Android and iOS, the most useful thing about the app is that it allows us to create an account on the official website of Lotteries and Betting and in this way, if we have touched something, the same body pays it to the account that you have created so that you do not have to go to the physical administration to present any receipt.