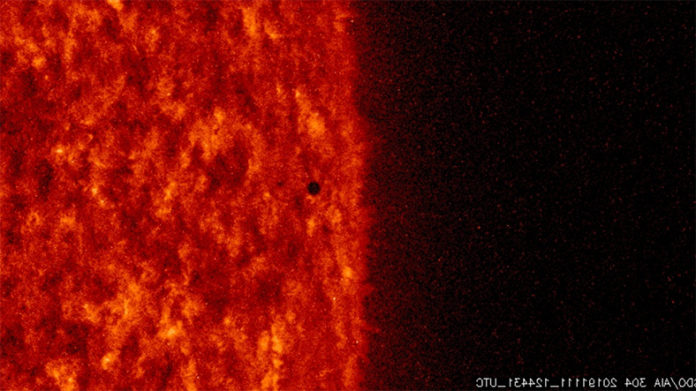 Mercury passed between the Sun and Earth yesterday. Photos and videos of this event, which will not be repeated until 2032, have been published. The passage of Mercury in front of the Sun NASA broadcast live on YouTube.

Mercury, passing between the Sun and Earth yesterday, left extraordinary visuals for the observers. Mercury’s passing in front of the Sun can be observed in the world is an important event. Because there are only two planets that can pass between the Sun and the Earth; Mercury and Venus.

Throughout the last 13 times, the passage of Mercury in front of the Sun has been observed from Earth. We are even a little more fortunate; for four of these 13 transitions took place over the past decade. However, the next Mercury transition will take place in 2032. More precisely, in 2032 we will be able to observe that Mercury passes between the Earth and the Sun.

Just a few more minutes in today's #MercuryTransit! Watch Mercury complete its journey across the Sun through the eyes of our Solar Dynamics Observatory satellite ➡️ https://t.co/5OFdcyOFJ8. SDO keeps a constant eye on the Sun, so it has a prime view for transits like this! 🛰☀️ pic.twitter.com/QuCxZL6u1X

The passage of Mercury, which took place yesterday, was observed for 5.5 hours in eastern North America and South America. During this transition, astonishing photographs and videos were obtained by astronomers and observers.

The Slooh YouTube channel also aired the passage of Mercury live. Watch Slooh’s live replay here. He published images of the moments when Mercury passed in front of the Sun in NASA. Here you can see the images of the Mercury transition published by NASA.

Scientists Want 2 Billion Dollar Spaceship to be sent to Venus