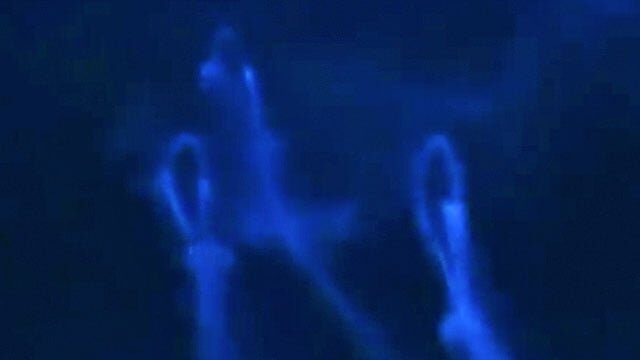 US photographer Patrick Coyne has viewed a flock of dolphins floating in California’s Newport Beach off the waters of plankton that can produce their own biological lights. The dolphins, which led to the emergence of incredible images in the pitch darkness of the night, once again revealed the miraculous world of nature.

Bioluminescence, the name given to the phenomenon of producing and spreading light by converting chemical energy into light energy during the chemical reactions carried out by some living organisms, makes some species of fish, octopus, shrimp, jellyfish, starfish, algae and shark live in the ocean.

Acidity, temperature and pressure changes are the main factors that initiate bioluminescence in living things. Bioluminescent creatures produce various pigments and enzymes. In some cases, even the coastal waves can allow some single-celled plankton living in the sea to biolumines.

Bioluminescence, a kind of chemical luminescence, makes some living creatures in the ocean shine.
US photographer Patrick Coyne witnessed this unique natural phenomenon with his friends off the Newport Beach in California. Coyne, who managed to display a flock of dolphins floating in waters with bioluminescent algae, shared these fascinating moments with the world.

The one-minute video shows that dolphins emit blue light as a result of bioluminescence in the ocean. The American photographer, who managed to observe this extremely rare natural phenomenon, said that he had the most fascinating night of his life in his post on his personal Instagram account.

Stating that he first saw bioluminescent creatures in Netflix’s documentary Night on Earth, Coyne stated that from now on, he has put his mind on viewing this unique natural phenomenon. The photographer, who said that they finally came across dolphins glowing in the ocean in their last tour with the boat, shared his knowledge of the images he took with the Sony A7S II camera.

Video with luminous dolphins displayed in the ocean

Deathloop will be exclusive to PS5 on console for a year

Get Windows to detect your second monitor with this trick

Scientists Discovered a Black Hole Collision That Could Explain the Beginning...