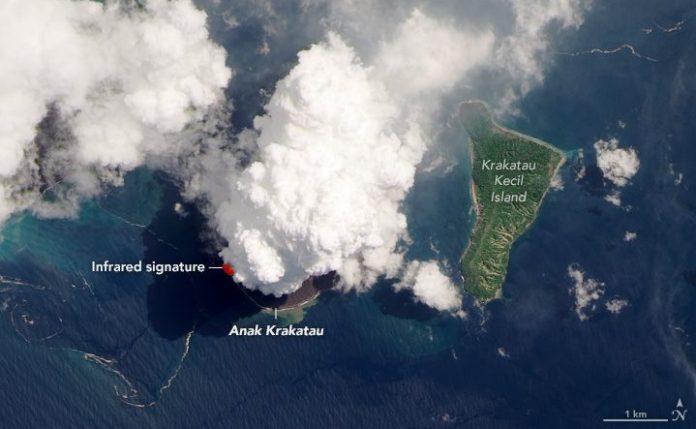 Anak Krakatau volcano, which is among the most active volcanoes in the world, on the western side of Indonesia’s Java Island, erupted recently. The spooky video of the ash and smoke that the volcano spreads around has been released.

Anak Krakatau volcano, located on the west side of Indonesia’s Java Island, erupted again on April 10. The activity of the volcano has been going on ever since. Clouds of ash and smoke from the erupting volcano continue to spread around as well.

Volcana Disvovery shared time-lapse footage of the eruption of the Anak Krakatau volcano. The images, which are about 1:30 minutes, show lava scattered around the volcano and the cloud of ash and smoke spreading to the sky.

Along with the ashes, water vapor rises to the sky
The eruption of the volcano, which has been active since April 10, still continues. In a statement on the subject on Tuesday, it was announced that even the small eruptions of the volcano spread a lot of ash and smoke. In the satellite images shared by NASA’s World Observatory, the ash cloud emanating from the peak of the volcano can be easily seen.

Verity J.Flower, who continues to work as a volcano expert at NASA’s Goddard Space Flight Center, explained that NASA’s Terra satellite’s MISR sensor is used to measure the distance traveled by the ash clouds emitted from the volcano and to observe the shape, size and light characteristics of the particles in the cloud.

NASA researcher Flower explained that the heavy ash particles emitted from the volcano will not reach high altitudes and will be moved northward with near-surface winds. White clouds of water vapor will rise to the atmosphere and intensify quickly, Flower said.

Volcano is responsible for some of the disasters in the history of Indonesia
Anak Krakatau volcano alone is responsible for some of the devastating disasters in Indonesian history. Located near the Sunda Strait between Java and Sumatra, the volcano erupted more than 50 times in the past 2000 years. The volcano finally erupted in 2018, causing a deadly tsunami to occur. Hundreds of people died due to the tsunami.

In the statement made by the Ministry of Energy and Mineral Resources of Indonesia about the explosion of Anak Krakatau, it was announced that the explosion would not pose any risk. Although lava flow and ash rain spread over an area of ​​2 kilometers radius, experts state that the risk level is 2 on 4 scales.

A Project That Will Make Sound From Scientists

COVID-19 Can Also Be Transmitted by Tears

Intel to pull US chip manufacturing services to Asia

NBA 2K21: gets a trailer with incredible graphics

Check out Cyberpunk 2077 specs on Ultra and Ray Tracing

Google does not certify mobiles with 2 GB or less of...

9 electric and hybrid SUVs to arrive in 2021