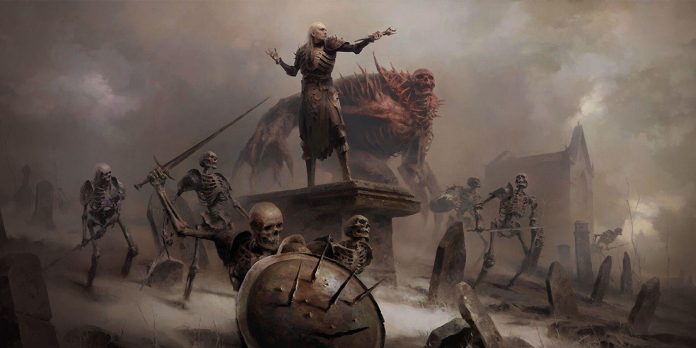 Blizzard’s Diablo series has been running since 1997, so unsurprisingly the games have covered a lot of narrative ground. Not only are there three core games, but there are expansion packs, additional types of media that expanded the story, and the recently released MMO ARPG Diablo Immortal. This would already be a lot of content to get through for fans, but on top of that is the upcoming release of Diablo 4, the fourth main installment in the Diablo series and a highly-anticipated sequel.

The Diablo series is full to the brim of rich lore and expansive storytelling, and it might be a good idea for fans to get to grips with the overall arc of the narrative before Diablo 4 releases. Encapsulating the complex and ongoing battle between good and evil, the Diablo series combines elements of dark fantasy and demonic themes with its macabre aesthetics. Diablo 4 may be reintroducing the enigmatic Lilith, but Diablo is full of other significant characters for players to get to grips with.

The first game in the series was met with critical acclaim, and it really launched the franchise in the best possible way. As players explored the procedurally generated dungeons and took on hordes of demonic foes, they learned about the devastating and never-ending war between demons and angels. Diablo takes place in the mortal realm, but the war encompasses two other realms as well – the High Heavens and the Burning Hells. Due to their actions during the ongoing conflict, three Lords of Hell were banished to the mortal realm.

Diablo, the Lord of Terror, was one of these Lords and was instrumental in creating chaos in the mortal realm until a group of magi called the Horadrim trapped him and his fellow hellish companions in Soulstones. Diablo’s Soulstone was buried deep in the ground under a monastery, and soon became forgotten. As time passed, a town named Tristram grew around the dilapidated and abandoned monastery, and Diablo began to manipulate the archbishop of the newly built cathedral to release him from his prison. The unleashed Lord of Terror then turned the town of Tristram into a place of fear and despair. Players defeated Diablo and took in his essence through the Soulstone in an attempt to stop his growing influence.

In the sequel, it turns out that fixing Diablo’s Soulstone to their forehead and absorbing his essence wasn’t really the best idea. The hero of the first Diablo has become corrupted by the Lord of Terror, bringing more demons into the world and continuing Diablo’s chaotic reign from the first game. The possessed former hero, now known as the Dark Wanderer, is also attempting to free Diablo’s other brethren, Mephisto and Baal.

Once reunited, the three open a portal to Hell, but the protagonist manages to defeat Diablo and Mephisto and destroy their Soulstones to prevent them from returning once more. In the expansion Diablo 2: Lord of Destruction, Baal is the last surviving Prime Evil, and after obtaining his own Soulstone from Marius he attempts to corrupt the Worldstone. This weakens the boundaries between the realms of Heaven, Hell, and the mortal world of Sanctuary.

Over a decade after Diablo 2, the next entry Diablo 3 was released. Players return to the world of Sanctuary twenty years after the events of Diablo 2 and its expansion. Deckard Cain, a prominent NPC in the Diablo series who guides gamers, is back as he explores Tristram Cathedral in search of answers about a prophecy before a falling star hits the building and creates a crater into which Deckard disappears. After investigating the crater and saving Deckard, players find the Archangel Tyrael and help him to restore his lost memories.

Appalled by the apathy of his fellow angels toward the plight of humanity and the plague of demons in Sanctuary, Tyrael chooses to become mortal so that he can help warn humans about the arrival of the Demon Lords. Players must counter the demonic forces and search out the Black Soulstone, which has the power to imprison the souls of all seven of the Lords of Hell. However, the player and their cohorts are betrayed and the Black Soulstone is used instead to resurrect Diablo with Leah – Deckard’s ward – as his vessel. Diablo now has all the souls of the Lords of Hell within him and begins his assault on the High Heavens. Diablo is eventually defeated and Tyrael remains in the High Heavens, determined to forge a greater bond between them and the mortal realm.

In the expansion pack Reaper of Souls, Tyrael recovers the Black Soulstone and attempts to seal it away in Sanctuary. But before he can, he is attacked by Malthael, a former Archangel of Wisdom who now calls himself the Angel of Death, and the Black Soulstone is stolen. Malthael is determined to wipe out humans, believing them to be demonic thanks to their origins as the offspring of both angels and demons. He eventually shatters the Black Soulstone and absorbs the power of the Seven Evils before being struck down by the player – freeing the Seven Evils once more.

With the release of the next Diablo game on the horizon, players are looking forward to seeing where the series might take the story. Diablo is sure to make some kind of appearance, even if it’s just through another character trying to resurrect him again. However, from the impressive cinematic trailer released for Diablo 4, it’s clear that Lilith is going to be the main focus of the upcoming title. While she has technically appeared in a Diablo game before, this looks like a revamp for the Daughter of Hatred and Creator of Sanctuary.

The ongoing Eternal Conflict – the war between the High Heavens and Burning Hells – has taken a massive toll on the forces of both angels and demons, as well as impacted the mortal realm of Sanctuary. Diablo 4 will be exploring the power vacuum the war has created, and the newly resurrected Lilith will take full advantage of this, especially with the Seven Evils being temporarily scattered to the winds. She’s an important figure in Diablo lore, even if her presence in the previous games has been very minimal, and fans are excited to see the daughter of Mephisto in action.

Diablo 4 releases for PC, PlayStation, and Xbox consoles in 2023.

Pokemon GO Players are unhappy with the Fossil Cup