Home Entertainment Explanation of the “Walking Dead” timeline: When will all 3 shows take... 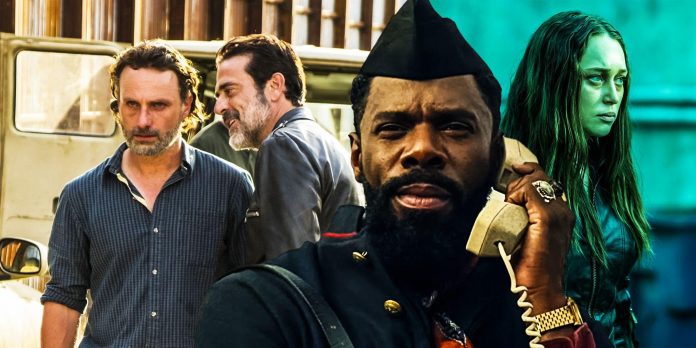 The original Walking Dead comic series employs several extended time skips that advance the story. The most notable leaps come firstly after Rick defeats Negan, and then at the very end of the comic, aging Carl Grimes from a teenager to a grown man with a child of his own. However, the timeline of The Walking Dead on TV has advanced at an ever-faster rate, with the post-Savior time skip far longer than in the comics. And where Fear The Walking Dead initially charted the origins of the outbreak, it soon caught up to the main series… before falling behind yet again.

Related: Why The Walking Dead Killed Tyreese In Season 5

Details regarding the planned Walking Dead movie remain scarce, but the story will likely explain what Rick got up to during the time skip before the Whisperers arrived, and why he never returned to Alexandria, before dealing with new threats such as the CRM and the French scientists in the present timeline. The Walking Dead’s big-screen endeavors might also catch up with Danai Gurira’s Michonne, who left to discover Rick’s fate. With 3 shows already twisting and turning around each other and even more zombie apocalypse goodness on the way, the world of The Walking Dead is trickier to follow than ever. With credit to Vincenzo Mei, this is a breakdown of the full The Walking Dead timeline in relation to each show and the real world.

Pre-outbreak: An incident at a French laboratory triggers The Walking Dead show’s zombie outbreak. The scientists attempt to fix their mistake, but make it worse, resulting in faster zombie variants. The French scientists initially liaise with Dr. Jenner in the U.S. but are imprisoned or killed by survivors in their native country.

The Walking Dead season 1: The Walking Dead’s timeline begins with Rick Grimes getting shot while on duty as a cop and falling into a coma. The entire world goes very wrong during his absence, and Rick finally awakens on day 59 of the zombie outbreak, with The Walking Dead season 1 taking place in mid-late 2010 (relative to when the premiere episode aired). The story kicks off properly with Rick’s awakening, and the entirety of The Walking Dead season 1 comprises a brisk 6 episodes, taking Rick from the hospital to Morgan’s house, then toward an emotional reunion with his family, and finally to the CDC where season 1 concludes. These events take place within 1 week, bringing us to day 64 — roughly 9 weeks since the virus began wreaking havoc.

The Walking Dead season 3: The first jump in The Walking Dead’s timeline occurs between seasons 2 and 3, moving the story forward approximately 7/8 months as Rick’s group endures a harsh winter and hones their survival skills. When The Walking Dead season 3 begins, the calendar has advanced to 2011, at which point the characters encounter a prison to make their new home. Michonne is introduced, and the first battle against The Governor takes place. This all happens in the space of a few weeks, bringing The Walking Dead’s timeline to somewhere in the vicinity of 321 days since patient zero first spluttered over someone.

The Walking Dead season 4: Another time skip occurs between The Walking Dead seasons 3 and 4, lasting a period of 6 months while the prison community enjoys a spell of peace. During this time, Morgan Jones meets Eastman and learns the art of Aikido that’ll serve him well in future seasons, while The Governor recoups and encounters new followers — including future The Walking Dead main character, Tara Chambler. Now towards the end of 2011, 500 days of zombie apocalypse summer have passed. Rick’s survivors are in flu season and enduring a devastating outbreak. The prison is abandoned altogether after The Governor attacks, forcing Rick’s people to split up and reunite at Terminus (a bad move, as it turns out). With each second-half episode in The Walking Dead season 4 focusing on a different group, the narrative takes place over a mere 1 or 2 weeks.

The Walking Dead season 7: With The Walking Dead season 6 ending on the notorious Negan cliffhanger, there’s no gap between season 6’s finale and season 7’s premiere. In fact, The Walking Dead actually rewinds a few minutes to show who met the wrong end of Negan’s baseball bat. Over the course of 12 days, Negan’s Saviors continue to lean heavily on both Alexandria and Hilltop, while contact is made with the Kingdom, Oceanside, and the Scavengers. An attempt to overthrow Negan goes wrong thanks to the duplicitous Jadis, and The Walking Dead’s timeline hits 610 days.

The Walking Dead season 8: With a couple of weeks passing since the season 7 finale and Rick’s declaration of war, The Walking Dead season 8 is now undoubtedly into 2012, and once again only charts a period of a few days. This is enough for Rick Grimes to turn the tide against Negan, and by the finale episode, the threat of the Saviors is over.

The Walking Dead season 9: In our first significant time jump, The Walking Dead’s timeline moves ahead 18 months, with Alexandria and its allies enjoying their longest period of peace and prosperity thanks to Negan sitting in jail. The first 5 episodes of The Walking Dead season 9 likely take place in late 2013 and span just over one month while the allied communities (now including the remaining Saviors) attempt to build bridges of both the literal and metaphorical kinds. The world has been awful for slightly more than 1200 days. This is when Rick Grimes “dies” in a fiery explosion.

8 months later (judging by the progress of Michonne’s pregnancy), the events of “Scars” take place. 16 months after that, Daryl meets Leah and Dog while out in the wild searching for Rick, and they casually bicker with each other over the ensuing 2 years of sporadic forest meetings.

The Walking Dead season 9 continues in late 2019. 6 years have passed since Rick’s assumed death, and Judith is now 8-years-old. Most of the season covers a short period of days where the survivors make first contact with the Whisperers, but after Alpha’s severed head display in “The Calm Before,” there’s another jump before the season finale, lasting 3/4 months and taking The Walking Dead’s narrative to approximately day 3500.

Fear The Walking Dead season 1: Spinoffs begin to muddy when the Walking Dead shows take place. Billed as a prequel to the main series, Fear The Walking Dead begins slightly before its predecessor in the period of time Rick Grimes was in a coma, putting the series premiere around July/August 2010 in real-world dates, then covering approximately 2 weeks of story. This takes Madison and her family from the moment they first notice the undead to their arrival at Victor Strand’s yacht on outbreak day 16.

Related: Daryl Should Be In The Walking Dead Movies: How Season 11 Can Set It Up

Fear The Walking Dead season 6: Left for dead by Virginia in Fear The Walking Dead season 5’s finale, Morgan Jones returns in season 6, revealing 5 or 6 weeks have passed (we appreciate when characters do this, thanks Morgan). From episode 1 (“The End Is The Beginning”) to episode 9 (“Things Left To Do”), a little under 2 months pass as Morgan gradually builds The Valley, and Virginia keeps her captives working tirelessly for the pioneers. Episode 10 (“Handle With Care”) continues the story following a short time jump, during which Morgan’s Valley, Strand’s Pioneers, and Sherry’s Outcasts have settled into a new regime without Virginia. The remaining 6 episodes of Fear The Walking Dead season 6 last around a week in the universe.

What To Expect From The Walking Dead Season 11 Part 3