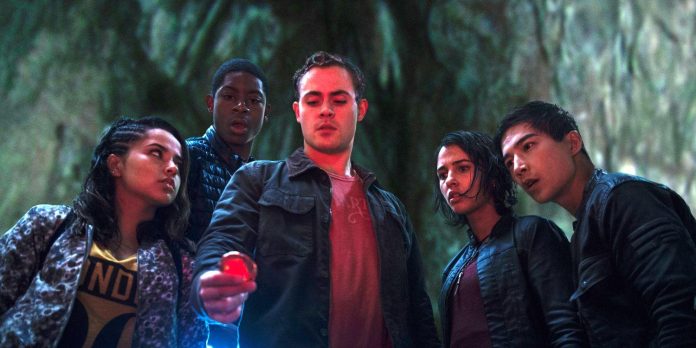 The Power Rangers movie is a reboot featuring an entirely new cast and a reimagining of the well-known characters — here’s the Power Rangers post-credit scene explained. Directed by Dean Israelite, Power Rangers stars Dacre Montgomery, Naomi Scott, Becky G., RJ Cyler, and Ludi Lin as the five titular teens who are recruited by Zordon (Bryan Cranston) to become superpowered warriors and defend the Earth against the evil Rita Repulsa (Elizabeth Banks). A big-budget reboot of the first season of the long-running TV series, the Power Rangers set out to save the world, and they make no bones about wanting to have the chance to do it again. They tried to set up a sequel the way every movie franchise does it nowadays: with Power Rangers’ post-credits scene.

Since Nick Fury appeared in a post-credits tag to inform Tony Stark about the Avengers Initiative in the original Iron Man, audiences now know to remain in their seats when franchise blockbuster films are running their end credits. Power Rangers is no different, taking full advantage of people’s expectations to deliver a significant hint about what, and who, people were supposed to see if the movie had performed well at the box office. The Power Rangers may be sporting the primary colors found in a Crayola crayon box, but every Power Rangers diehard knows full well that there is one all-important color missing: that of the Green Ranger.

Related: Power Rangers: Who Was The Original Gold Ranger?

Power Rangers ends by bringing us right back to where three of the Rangers — Jason Scott, Kimberly Hart, and Billy Cranston — met when the movie started: in detention. Having saved the world from Rita Repulsa, the three teens who are now secretly the Rangers are right back where they must be every Saturday if they want to graduate high school. The teacher monitoring detention announces they have a new student joining detention in classic Ferris Bueller fashion, by repeating the name “Tommy Oliver” over and over. The camera pans to an empty desk with a green jacket, but no Tommy Oliver. The implication of the Power Rangers post-credit scene is crystal clear: people were supposed to meet Tommy Oliver’s Green Ranger in a sequel. Unfortunately, that won’t come to pass.

Tommy Oliver being teased as part of the future of Power Rangers made perfect sense at the time. Tommy is not only immensely popular with fans, but he is also the closest thing to a main character that the Power Rangers franchise has. Portrayed by Jason David Frank (who makes a brief cameo in Power Rangers along with Amy Jo Johnson, the original Pink Ranger), Tommy’s exploits have spanned the duration of Power Rangers history, and he is regarded as the most skilled Power Ranger among the fans and within the community of the Rangers themselves.

Outside of the Power Rangers post-credits scene, Tommy Oliver has appeared as a number of Rangers. After debuting as the Green Ranger, Tommy has served the forces of good as the White Ranger, the White Ninja Ranger, Zeo Ranger V Red, Red Turbo Ranger, and Black Dino Ranger. As he aged and matured throughout the television series’ continuity, Tommy rose to achieve a 6th-degree black belt in karate and earned a Doctorate in Paleontology. He is Dr. Tommy Oliver in the later Power Rangers seasons.

The way Tommy as the Green Ranger was introduced in the original Mighty Morphin Power Rangers series is the story that likely holds the most relevance in regards to his origins. In the series’ only five-part tale entitled “Green With Evil,” Tommy Oliver was a new student at Angel Grove High School. He was a rival in karate who defeated Jason, secretly the Red Ranger and leader of the Power Rangers. Kimberly, the Pink Ranger, had a crush on Tommy as the cute new guy in school. But the unhealthy interest Rita Repulsa took in Tommy changed everyone’s lives — and Power Rangers history.

Despite the Green Ranger being teased in the Power Rangers post-credits scene, the 2017 film should be considered a standalone movie. Initially, the Power Rangers movie was supposed to be the start of a new franchise, with multiple sequels planned and plenty of content in the works. However, the film was an outright failure, basically killing all prospects of any sequels or spinoffs. At the time of writing, Saban’s Power Rangers sits at a 51% critic rating on Rotten Tomatoes, with a sad 65% audience score. The Lionsgate movie had a budget of $100 million and only made $40 million at its domestic opening. Worldwide, the film barely scraped by, making $142.3 million. As a result, any potential sequel ideas were scrapped, and the Power Rangers franchise will go unfinished.

The Power Rangers post-credits scene left people wanting more, especially from the Green Ranger, originally played by Jason David Frank, but that won’t come to pass. Many critics panned the film for its cartoonish action sequences, which were ultimately a letdown. The leading cast wasn’t necessarily praised for their performances, with many critics saying that they were interchangeable and lackluster. While some enjoyed actress Elizabeth Banks as the villain, others thought her depiction of the character was so outlandish that it belonged in an entirely different movie. In the end, a lot of people thought that 2017’s Power Rangers was just another cash grab that exploited nostalgia for nostalgia’s sake.

With Trini, the Yellow Ranger (Becky G.) established as the first LGBTQ Power Ranger and Billy the Blue Ranger (RJ Cyler) also making history as the first autistic Power Ranger, it will be interesting as well to see what changes, if any, the new Hasbro reboot will make. So while the Power Rangers post-credit scene teased the Green Ranger with the intention of making a sequel, the 2017 film won’t be getting another installment. People will have to wait and see what Hasbro has planned for the future of the characters.