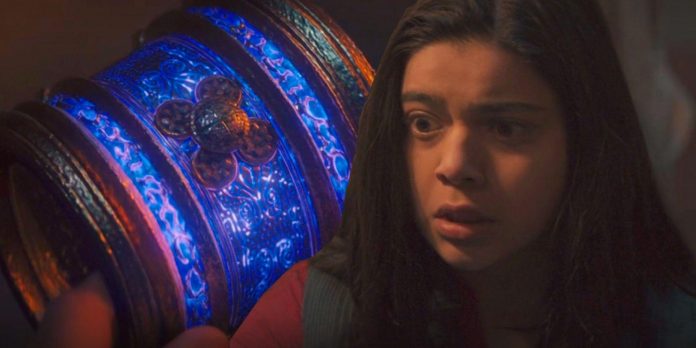 Going beyond her new hard light powers, Ms. Marvel just introduced another new MCU power for Kamala Khan. Introduced on-screen with altered origins and powers from her comic book source material, it looks as though Marvel Studios has decided to go all-in and give Kamala a dynamic story that far exceeds the one she has in the comics. As such, this new ability to time travel plays a large factor in Kamala learning about her secret family history (as well as where she fits into the legend of her great-grandmother Aisha).

In previous episodes of Ms. Marvel, Kamala Khan has been grappling with the new powers she gained from the bangle which used to belong to her great-grandmother. Struggling to keep her new abilities and heroics a secret from her family, she’s also been evading a group of Djinn (aka ClanDestines) who want to use the bangle to go home at any cost. However, Kamala has also been having visions of the night Aisha disappeared, leaving Kamala’s grandmother Sana with the bangle that the young hero recently inherited. Traveling to Pakistan at Sana’s request (who’d also been having the visions), Kamala clashed with the ClanDestines before finding herself in the midst of the Partition of India in 1947.

Ms. Marvel episode 5 confirms that Kamala did indeed travel back through time (through no intention of her own). Uncovering the mystery of Aisha and what happened to her family that night, Kamala’s new ability to time travel instantly becomes one of her greatest powers that helps secure her own existence. Here’s how Ms. Marvel is able to time travel in the MCU.

How Ms. Marvel Can Time Travel

While it’s not a power Ms. Marvel has in the comics, Kamala’s new ability to time-travel in the MCU is extremely impressive. However, it doesn’t seem as though it’s one she fully understands or can control just yet. As seen in Ms. Marvel episode 5, Aisha was stabbed by her fellow Djinn Najma who felt that she had betrayed the ClanDestines by starting a family and keeping the bangle hidden rather than using it to send them home. Serving as her final act, Aisha unlocked the power of the bangle which brought Kamala to the fateful night where Aisha, her husband Hasan, and their young daughter Sana were attempting to flee the country, suggesting that it was Aisha controlled Kamala’s time travel this time, but it is an power of the bangle and Kamala’s own powers.

Kamala’s adventure in the 1940s is revealed to be more than a vision as Aisha gives Kamala a family photo and tells her to get Sana back to her father on the crowded train leaving India during Partition. According to her family’s legend, Sana was separated from her father after Aisha was lost and was led back by “a trail of stars”. Now, Kamala is seen using her hard light constructs to guide Sana’s way back to Hasan, only realizing afterward that she was the origin of the trail of stars the entire time. After saving Sana (and paradoxically ensuring her own existence), Kamala returns to the present. It seems that Kamala can use the bangle and her powers to travel through time, potentially to points where other people have possessed the bangle in the past. While this new power might seem like a departure from her energy abilities, it fits with the wider MCU. In Ms. Marvel episode 1, Kamala places the bangle on her wrist and appears to travel to another dimension. This is later revealed to be the home of the ClanDestine Djinn and if the bangle can allow Kamala to travel to other dimensions then, much as the Avengers: Endgame time travel works around the Quantum Realm, her dimensional travel and time travel make sense to be connected in the wider MCU mythos.

Why Ms. Marvel’s Powers Are So Different Than The Comics

Combined with the hard light constructs, Ms. Marvel’s new ability to time-travel makes her powers even more different than those seen in the comics. She’s far more than a polymorph who gained her powers from the Inhumans’ Terrigen Mists. Instead, the bangle has unlocked inherent cosmic and supernatural abilities that make her incredibly powerful in comparison. While this is largely due to a desire to make her powers more distinctive from the similar stretching abilities of the Fantastic Four’s Reed Richards, this new episode confirms that the reasoning goes deeper than that.

Marvel Studios have been doing an impressive job tying Kamala’s new MCU powers to her cultural origins and heritage. The bangle is intrinsically tied to her heritage, allowing Kamala to develop her own unique identity separate from the superheroes she loves so much like Carol Danvers’ Captain Marvel. While her powers in the comics are great and a lot of fun, their source is something that has very little to do with who she is and her family history. As a result, the new powerset allows Marvel to take what’s so great about Kamala from the comics and expand upon it further by making her origins even more unique for the MCU. Clearly, Kamala Khan’s new ability to time-travel and her adventure in the 1940s will play a major role as she continues to forge her own unique superhero identity as Ms. Marvel heads for its season finale.