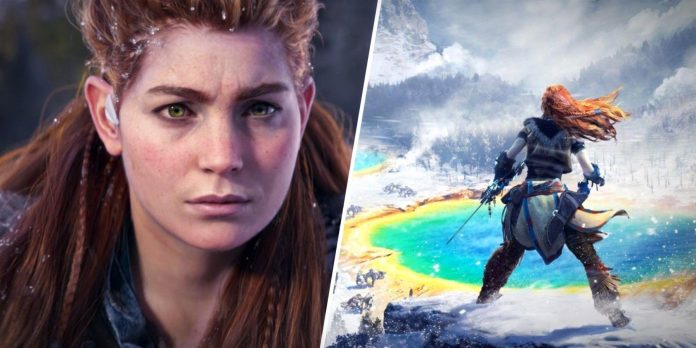 Horizon Forbidden West’s successful launch, at the start of what’s been an eventful year for Sony, is a testament to the progress Guerrilla Games has made as a studio. Among other heavy-hitting releases, movie adaptations, and acquisition announcements, Aloy’s sophomore adventure has stood out from the crowd on PS4 and PS5. So much so that the open-world series looks set to become one of the publisher’s most important going forward, evidenced partly by how fast its Netflix show has been put into development following the game’s February debut.

Considering everything that Guerrilla Games has achieved, then, it’s understandable that fans are eager to see what’s next for the franchise from a video game perspective. While Horizon Call of the Mountain looks set to be an engaging side-story on PS VR2, where Aloy’s personal journey will go next is still mostly up in the air. Against a backdrop of speculation and anticipation though, several rumors have popped up online that suggest players might get answers to this dilemma via a DLC story expansion for Horizon Forbidden West.

RELATED: The Next Horizon Game Should Expand Upon Forbidden West’s Base

One of the keys to Sony’s recent single-player success on PS4 and PS5 has been the concentrated pivot toward motion capture technology that most of its first-party studios have made. It’s subsequently become a common occurrence for actors associated with games like God of War: Ragnarok and Marvel’s Spider-Man 2 to post behind-the-scenes social media messages whilst working for the publisher. Guerrilla Games’ Horizon Forbidden West and its cast are no exception either, which is where part of the sequel’s DLC expansion rumors have come from.

Over on Instagram, the Dutch actress Peggy Vrijens posted a video reel last week of herself in a motion capture suit that’s caught the attention of Horizon’s fan-base. While the process of bringing Aloy to life has always been a collaborative endeavor involving several people, Vrijens has garnered acclaim as the motion-capture actor behind some of her traversal and combat animations. The fact that the actor has alluded to her return to mocap acting, several months after wrapping up her role on Forbidden West’s main campaign, is therefore an intriguing development.

Some fans have speculated that Vrijens could have donned her suit again to work on an unannounced Horizon Forbidden West DLC expansion. The fact that the inevitable third mainline entry in the series is likely years away, and therefore nowhere near being ready for mocap, backs this up to some extent. It’s worth keeping in mind though that there’s nothing to stop the actor from working on another project, and everything should be taken with a dose of skepticism as a result. It’s been confirmed that Aloy will feature in the upcoming Call of the Mountain, for example, which will likely involve Vrijens in some capacity as well.

RELATED: Why Does Aloy Struggle to Connect With Beta In Horizon Forbidden West?

It’s fair to say that the aforementioned Instagram reel isn’t the only potential piece of evidence that fans have been mulling over though, when it comes to a theoretical expansion for Horizon Forbidden West. Thanks to the social media platform it’s been revealed that Vrijens recently met up with Louis Van Beek, who also provided motion-capture and voice acting support for the game. Beyond the fact that no DLC has been officially announced by either Sony or Guerrilla Games, fans should take everything with a grain of salt, as it’s not particularly unusual for two colleagues to meet like this even if they aren’t currently working together.

While there’s every chance that Vrijens’ social media posts could just be coincidental as a result, the atmosphere that’s surrounded Horizon Forbidden West since its launch partly explains why fans have been examining them in detail. It’s been pointed out by eagle-eyed players, for example, that several areas across the game’s map appear to have been built with potential DLC in mind. One abandoned fortress north of Plainsong and a mysterious stretch of water south of Latopolis have both been frequently cited due to their proximity to the game’s current borders. Plenty of games in the past, including Horizon Zero Dawn, have admittedly been expanded along similar lines.

Thanks to several recent patches that Guerrilla Games has pushed for Horizon Forbidden West, fans have focused in on the former location in particular. Several photos and videos have been posted online of players being able to seemingly place map markers on the fortress. Instead of being met with errors, though, the game has on multiple occasions created a route for them to follow that twists around the mountain like it’s been designed by a human developer. While it’s obviously possible that these areas were just cut from the final game, there’s a chance that they could pop up again down the road.

With all of this context in mind, Vrijens’ posts are arguably the most enticing supporting evidence that players have been able to hold onto in regard to Guerrilla Games’ plans. Even before Horizon Forbidden West was released there’s been an air of expectation when it comes to the topic of DLC. Now that the game has entered its post-launch window, it can be argued that these feelings have continued to grow with good reason. After-all, Horizon Zero Dawn’s The Frozen Wilds expansion was announced at a comparable point in its lifecycle, only a few months after the game’s release back in 2017.

Even though it’s admittedly hard for a historical precedent to be set with just one game, some fans believe Horizon Zero Dawn’s DLC and Sony’s love for single-player expansions could still provide a roadmap for Forbidden West’s future. In the run-up to its release it was also discovered that the game had been given an age rating certificate in the UK that alluded to the presence of DLC and an online storefront. There’s obviously a chance that plans could have changed by now, or that Guerrilla Games might have only been covering its bases, but it’s intriguing information all the same.

With rumors swirling online that suggest Sony could be gearing up for its annual PlayStation Showcase, there’s a decent chance that fans will get answers to Horizon Forbidden West’s possible DLC soon, one way or another. Considering how Guerrilla Games announced and released The Frozen Wilds DLC, a late 2022 launch could still be a possibility. It’s also worth keeping in mind that the PS5 now has a Forspoken-sized hole in its October release schedule, and it’s hard to envision Peggy Vrijens needing to record too much new footage for Aloy either.

Horizon Forbidden West is out now for PS4 and PS5.

Among Us, VR Gets a Hilarious New Gameplay Trailer

Ghostbusters are much scarier than fans think, and one villain proves...