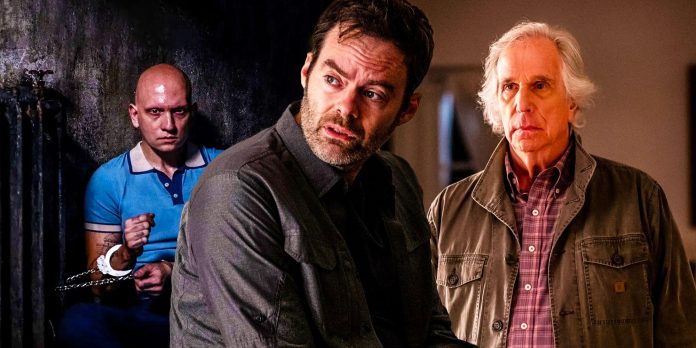 Warning: spoilers for the third season of Barry.

The third season of “Barry” is over, and there’s a lot to figure out in the tense finale. Barry’s Season 3, episode 8, “Starting Now” is full of betrayal, violence and exposure, making it one of the show’s most exciting episodes. It’s also an episode with a lot of important plot details, both for Barry’s personal arch and for his entourage.

Barry follows the titular hitman Barry Berkman (Bill Hader), trying to balance his criminal past with his personal life and acting career. Although Barry seems to have sorted it out in season one, his murder of Detective Janice Moss sets off a series of events involving his former boss Fuchs (Steven Root) and his former acting teacher Gene Cousineau (Henry Winkler) that haunt him throughout season 2 and season 3. Season 3 of Barry finally shows that Barry’s life is falling apart: he loses his girlfriend Sally (Sarah Goldberg), Cousineau discovers that he killed Detective Moss, Fuches hunts Barry, and Barry has violent visions due to his deteriorating mental health.

Season 3 Finale Barry is a tense 30 minutes of tense scenery, and the critically acclaimed episode raises almost as many questions as it answers. Although Barry Berkman has managed to balance his two lives so far, the events of the season 3 finale of “Barry” call into question how long he will be able to hold out. Featuring things like Gene Cousineau’s betrayal and Sally’s first murder, here’s everything that happened in Barry’s season 3 finale.

What happens in the finale of the third season of “Barry”

After waking up in the hospital due to poisoning, the episode begins with a recovered Barry returning home to find Sally, his ex-girlfriend. Barry’s season 3 foreshadows revenge leading to the fall, as evidenced by Barry’s Chechen tale, which pays off shortly after Barry returns home. A thug seeking revenge on Barry enters the house and immediately hits Barry, knocking him out. The man then tries to strangle Sally, but he almost succeeds before Sally gets the upper hand and stabs him. Sally then brutally beats the man to death with a baseball bat, which, in Barry’s opinion, could have been a little excessive. Barry tells Sally to leave town and that he will take the blame for the murder, and she listens. Although it is not immediately known where Sally is running to, it later turns out that she is flying to Joplin, Missouri, Sally’s hometown, and the place on which her failed TV show is based.

The second big storyline in the season 3 finale of “Barry” is related to the character Noho Hank. Having been captured by the Bolivians in the previous episode, Hank wakes up in an underground prison, where he hears how a panther has torn apart his fellow Chechens in the neighborhood. Miraculously, Hank manages to get a gun and escape from prison, heading over the ground. There Hank finds his boyfriend Cristobal undergoing shock conversion therapy. Hank manages to use the gun to kill Cristobal’s kidnappers, free him, and finally force Hank to commit his first act of violence.

The last main arch of the Season 3 finale Barry talks about Barry’s connection to Jim Moss and the police. After FBI agent Albert Nguyen confronted him and released him, Barry later ends up at Jim Moss’ house, where he tries to dissuade Cousineau from killing Moss. Season 3 follows Barry’s attempt to earn Cousineau’s forgiveness, and Barry plans to finally let Cousineau live a happy life by killing Jim for him. However, when Barry enters the house with a gun, he discovers that the building is surrounded by police. When the cops break into the room and arrest Barry, he discovers that not only was it set up by Jim Moss, but also that Cousineau used his acting skills to trick Barry into coming. This shocking moment is revealed just seconds before the episode goes black, ending the season with a cliffhanger.

Why did Cousineau betray Barry?

Although Barry’s season 3 began with Cousineau discovering that Barry was the one who killed Detective Janice Moss, Cousineau seemed ready to help Barry by the end. However, Barry is shocked to discover that it was Cousineau who lured him into the Jim Moss trap, leading viewers to wonder why he betrayed Barry in such an unsettling way in the final moments of the HBO crime drama. There are two possible explanations for this. First, Jim Moss could convince Cousineau to impersonate Barry so Moss could get revenge. Earlier this season, Moss explained that he once persuaded someone to commit suicide during the Vietnam War, so he clearly has the skills to convince Cousineau to betray his friend. However, a more likely explanation is that Cousineau betrayed Barry in order to finally be free.

Snoop Dog revealed that a rapper would work in GTA 6