Home Entertainment Explanation of the ending of the interceptor 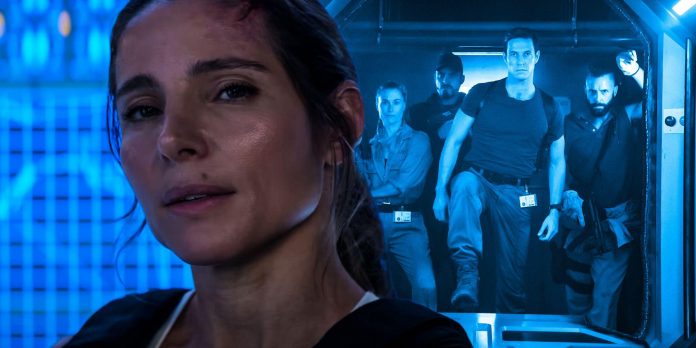 Captain J.J. Collins (Elsa Pataky) saves the United States from a nuclear attack in “The Interceptor,” but the finale leaves open the possibility that the Russians will try again in the sequel. Filmed and co-written with Stuart Beatty by Matthew Reilly, the American-Australian war thriller has become an unexpected hit on Netflix. Interceptor soared to the top spot in 93 countries with more than 50 million hours of viewing on the streamer.

The plot of the “Interceptor” tells about an American rogue soldier named Alexander Kessel (Luke Bracey), who was paid by Russian terrorists to launch 16 nuclear missiles to wipe the United States off the face of the earth. In order for Kessel’s plan to succeed, he had to disable two American launch pads for interceptors: Fort Greeley in Alaska and SBX-1, a platform in the Pacific Ocean, where Captain J. J. had recently been stationed. An interceptor action is taking place. Collins, who was not inferior to Kessel’s cat-and-mouse games, thwarted the villain’s first attempt to launch a nuclear strike on Los Angeles by successfully launching an interceptor missile to destroy the warhead. After Collins killed each of his henchmen and blocked Kessel from the SBX-1 command center, Alex responded by initiating protocols to sink the platform, which deprived Collins of the opportunity to launch his interceptor missiles.

Meanwhile, the U.S. military is on the way, but will arrive too late to help Collins, stop Kessel, or prevent the sinking of SBX-1, which leaves America’s fate in the hands of Captain Collins. In the finale of The Interceptor, Collins, whose left arm is injured, is also emotionally distraught after Kessel kills JJ’s father, Frank Collins (Colin Friels). To prevent Kessel and his nukes from blowing up America, Captain Collins embarks on a last-ditch plan, which is supported by President Wallace (Zoey Carides), who is watching from the White House.

Collins’ missile interception plan and why it Worked

Collins’ plan is based on the fact that she needs to trick Kessel into launching 15 Russian nuclear missiles before the SBX-1 sinks. If Kessel is allowed to wait until the platform is flooded, the US will have no chance to launch interceptors to stop nuclear weapons. So Collins decided to let Kessel occupy the SBX-1 command center to launch his missiles, because he assumes he can’t be stopped at that point. Collins then planned to retake the command center and launch interceptors. It was a big and dangerous game that would decide the fate of millions of lives, but it was the only game Collins had at that time. Collins was alone, and her only ally, Corporal Shah (Mayen Mehta), was killed by Kessel’s men.

After Kessel regained the command center, he actually acted as Collins predicted and launched his nuclear weapons. Collins made her way back to the command center, but found that Kessel had disabled the interceptor launch button with acid. Collins’ only option was to climb onto the roof of the SBX-1 and connect to the system using her laptop so she could activate the interceptor missiles. On the roof, Collins fought and killed Beaver (Aaron Glenane), the last of Kessel’s men. The decapitated corpse of Collins and Beaver actually falls into the Pacific Ocean, which requires the wounded heroine to climb back onto the roof of SBX-1 with one hand. But Collins manages to do it in a matter of seconds and launches interceptors. Fortunately, each interceptor missile found its target, and all fifteen Russian nuclear bombs were destroyed in the sky. Collins saved the United States.

Why did the Russians kill Alexander Kessel and not Collins

With his plan completely ruined, Kessel’s last resort was to kill Collins and wait for his Russian allies to pick him up on their submarine, which had been hiding in the waters around SBX-1 for several months. Collins, who had endured an incredible amount of brutal fighting with Alex’s men, was still Kessel’s equal, but was too exhausted to kill him. Then a Russian submarine surfaced, and Kessel was excited by the appearance of his “friends”. However, the captain of the Russian submarine ordered his sniper to shoot Kessel instead of Collins. After Kessel’s death, the Russian captain tipped his hat to Collins and left when United States helicopters finally arrived at the sinking SBX-1.

Kessel is trained in PSO, and he has a deep-rooted grudge against his own father and the United States. However, he was only a Russian-hired operative, not the true mastermind of a terrorist plot. Moreover, Kessel was accountable to the Russians who paid him. When Collins’ interceptors destroyed the Russian missiles, Kessel was no longer needed or useful. In fact, he was a burden. The Russians weren’t going to take Kessel with them, and he wasn’t allowed to stay alive and possibly reveal who his employers were. The murder of Kessel put an end to the last question of the Russians.