Home Entertainment Explanation of the ending of the first season of “The Bear” (in... 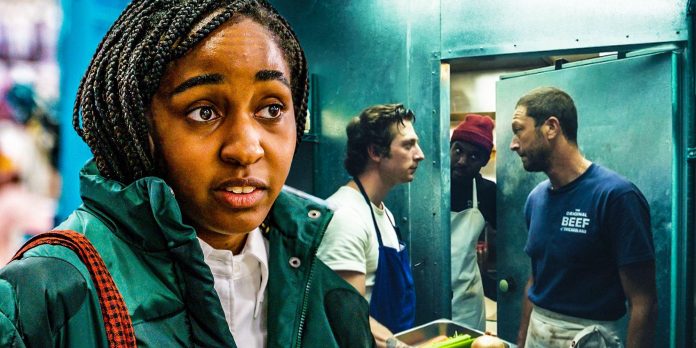 Attention! Contains SPOILERS for the first season of the TV series “The Bear”!

The ending of the first season of “The Bear” answers questions about the past of The Original Beef and determines the future of the restaurant under the leadership of Karmi. Developed by Christopher Storer for FX and Hulu, The Bear movie debuted on the Disney-owned streaming service in June 2022. It received excellent reviews for its realistic depiction of the chaos that occurs when working in the food industry, as well as the image of someone coping with anxiety and grief.

The cast of the first season of “The Bear” is led by Jeremy Allen White as Carmen “Carmi” Berzatto, a talented young chef who leaves his post at the best restaurant in the world to take over a family sandwich shop in Chicago. He takes an unexpected step after the death of his brother Mikey (played by Jon Bernthal from “The Punisher”) and begins to get tired of the verbal and psychological insults he was subjected to by his former boss (Joel McHale from “Community”). Much of the story of the first season of “Bear” follows Carmi’s attempt to make “Original Beef” better than a dirty but familiar establishment in the Chicago area.

While Carmi’s “cousin” Richie (Ebon Moss-Bachrach) tries to keep the original beef the same as it has always been, Carmi’s ambitions are helped by a new employee Sidney (Ayo Edebiri). The incredible trio rarely see eye to eye as they argue about changes to menus and work styles. Meanwhile, Carmi also highlights the financial difficulties that Mikey’s decisions have created for The Original Beef, forcing them to experiment with takeaway orders, which goes horribly. All this leads to the unexpected end of the first season of “The Bear”, which leaves room for the continuation of the release of Hulu in a completely new way.

What does Mikey’s letter to Carmi say

One of the mysteries of the first season of “The Bear” is connected with Mikey’s letter to Carmi. At the beginning of the season, Richie finds a letter addressed to Carmi on the floor behind the lockers. Although he wants to give the letter to Carmi first, his anger gets the better of him when he returns the letter to Mikey. In the finale of the first season of The Bear, Richie finally brings the letter to Carmi’s attention when the young chef is in decline. Jeremy Allen White’s character is understandably shocked when he is handed a letter from his late brother, and spends time alone before deciding to open it.

Mikey’s letter to Carmi in the first season of “The Bear” had a very simple message that John Bernthal’s character wanted to convey. On the front of the letter was written: “I love you, man. Let it break.” These two short sentences were enough to make Carmi cry, as he looked up to his brother, but resented him because Mikey never allowed him to work at The Original Beef. The letter reminded Carmi that Mikey really loved him, and the inclusion of his catch phrase “Let it break” made it clear to him that he believed he would take over. On the back of Mikey’s letter was a mysterious recipe for spaghetti Family Meal, which Carmi had failed to crack earlier.

After reading Mikey’s letter and receiving the family recipe, Carmi decides that spaghetti is included in the family dinner menu. He follows Mikey’s recipe exactly, even using 28-ounce cans of tomato paste, which, according to Bernthal’s episodic character, tastes better. The truth is that these little jars of sauce contained a special surprise for Carmi. He finds a wad of money hidden in the sauce and is understandably shocked to find it. He immediately calls Richie into the kitchen and forces everyone at The Original Beef to help open the cans to find even more money.

The money in tomato cans in the finale of the first season of “The Bear” answers one of the biggest questions that Carmi has been asking since she became the owner of the restaurant. He found records of Mikey making large payments to KBL Electric, but no one knew what kind of company it was. The amount of money matched the amount Mikey borrowed from Cicero/Uncle Jimmy (Oliver Platt of Chicago Med). Although it was believed that the character had squandered all this money, it seems that he had been saving it all this time. A quick shot in the finale of the first season of “Bear” shows that “KBL” is at the bottom of cans of tomatoes, which means that Mikey put money in them for safekeeping.

Why is Carmi Finally Shutting Down the Original Beef

At the very end of the first season of The Bear, Karmi makes an important decision, as he finally decides that it’s time to close the “Original Beef”. The arc of his character throughout the first season shows how he struggles with this environment and tries to correct the mistakes made by Mikey. Since the bank and the IRS will potentially come after his sister’s house, since she is the co-author of The Original Beef, she is pushing him hard to close The Original Beef. After reading Mikey’s letter and finding the money that will rid him of the Chicago mafia, Carmi finally feels that it’s time to close the restaurant.

How to Farm Coins Quickly in Mario Strikers Battle League