Home Entertainment Explanation of the ending of the first season of God’s favorite idiot... 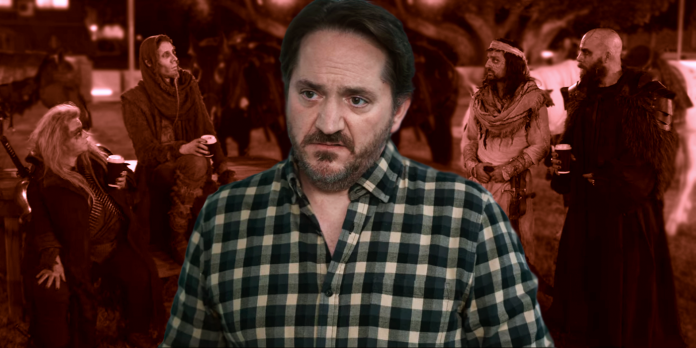 The new Netflix series God’s Favorite Idiot from husband-wife duo Ben Falcone and Melissa McCarthy combines workplace comedy with a religious apocalypse, but due to unexpected changes in the show’s production, season 1’s ending left more questions than answers. God’s Favorite Idiot follows Clark Thompson (Falcone), a simple but sweet IT specialist suddenly chosen by God to assist in the ultimate battle between good and evil. Alongside him is McCarthy’s Amily, introduced as a bit of a human disaster who gradually becomes Clark’s girlfriend and his most trusted ally, as well as their various co-workers and a few key angels that come into play throughout season 1.

Season 1 was originally intended to be 16 episodes, but Netflix halted production in Australia after the first 8 episodes had been shot, opting to instead release the show in two 8-episode batches. While there has been no official word yet on when production might resume on the remaining episodes, the actors have been paid for all 16 episodes already (via Variety), making it very likely that the show will at least finish out season 1 despite poor critical reviews and mixed audience reception. The unexpected split of the season, however, has resulted in God’s Favorite Idiot ending on multiple cliffhangers, with almost none of the season’s various threads satisfyingly wrapped up.

Related: Why God’s Favorite Idiot Is So Popular (Despite Bad Reviews)

God’s Favorite Idiot is largely a two-person vehicle, but the series has a large cast of supporting actors who each become more involved as the show progresses. Characters like Mohsin (Usman Ally) and Wendy (Ana Scotney) do feel underdeveloped, especially early on, with the show favoring repeating gags like Tom’s bathroom obsession and Frisbee’s ineffectual attempts at maintaining a healthy work environment. Nevertheless, each character does play a role of some kind in the battle between God and Lucifer’s forces, and the unexpected cliffhanger ending of God’s Favorite Idiot Part 1 has resulted in a lot of questions.

During God’s Favorite Idiot episode 7, Satan continues to chip away at the morale of the good guys by FaceTiming Clark and claiming that she had finally succeeded in killing the angel Chamuel (played by McCarthy’s long-time Gilmore Girls co-star Yanic Truesdale), and that God had also been lost in the cosmic battle between good and evil. Episode 8 reveals that Satan was indeed lying to the group, as God appears to Clark in the bathroom one last time to confirm that she is still very much alive. God does note that Chamuel is in bad shape due to the escalating war in the heavens, which unfortunately “isn’t going in the right direction”. This changes the trajectory of God’s Favorite Idiot quite a bit, as Clark is given updated directions from God that no longer include spreading the good news throughout the greater Los Angeles area.

Why Clark & Amily Run Away

Clark and Amily spend most of God’s Favorite Idiot doing their best to spread God’s message to the masses, but their attempts seem to have very little impact as people are generally too set in their ways to accept the show’s all-inclusive religious premise. Thanks to Satan’s meddling and Reverend Milton Throp working his evangelical Christian masses into a frenzy, Clark actually seems to attract more hate than hope by the end of Part 1. As God herself rather nonchalantly puts it, “[he] could have done better, but [he] also could have done worse.”

The reason Clark and Amily change course in God’s Favorite Idiot’s ending is that God actually tells them to pack up and leave town in order to remain safe, specifically stating that she may need him again if things go poorly. Clark is told that they are essentially on their own for the time being, as she must focus all her energy on holding the line against Lucifer’s forces in the heavenly battle, leaving things on Earth to Clark and the gang. Before leaving, God provides Clark with his next destination—although the specifics remain a complete mystery to the viewer—and God’s Favorite Idiot ends with him and Amily driving out of the city together.

Related: What Time The Umbrella Academy Season 3 Releases On Netflix

This scene also serves as the culmination of Clark and Amily’s romantic relationship. While it’s revealed early on that Clark has been “pining” for his co-worker for quite some time, and their relationship continues to grow throughout the season, Amily’s commitment is called into question at times. While Clark rather quickly drops “I love you” into the mix, Amily is initially unable to say it back and even questions whether or not she will follow through with a Tinder date after the two spend the night together. The end of God’s Favorite Idiot episode 8 sees Amily take Clark’s hand and admit that she loves him too, as God seemingly plays them one last song on the radio in the form of the standard “Dream A Little Dream Of Me” performed by The Mamas and the Papas.

By God’s Favorite Idiot’s ending, Lucifer’s forces have evidently won quite a few important battles, but they have yet to fully win the war. God’s aforementioned bathroom chat with Clark reveals that Lucifer has the upper hand, and while she intends to focus all her attention on combating that threat, it ultimately may not be enough. Clark and Amily going into hiding can be seen as a big victory for the bad guys, at least on Earth. Chamuel has been injured in the fight, and while the Netflix series doesn’t spend enough time with its cosmic characters to know for certain, it’s likely other angels and many of God’s forces have been lost in the battle.

While things aren’t looking good for the fate of humanity at the end of God’s Favorite Idiot episode 8, there are a few key factors that may expose a weakness in Lucifer’s current dominance. While the Four Horsemen of the Apocolypse are sent to Earth by Lucifer to herald the end of days, and they do chase after Clark and Amily outside of the hospital, their allegiance may not be as rock-solid as initially anticipated. The Horsemen (or rather, the “Horsepeople”) also tell Satan that they were told to stand down by “the other side” and that the battle in Heaven had yet to be decided. Another potential issue in Lucifer’s plans is actually Satan, who may be planning a hostile takeover right in the middle of the ultimate battle between good and evil.

Satan puts Clark’s dad Gene (Kevin Dunn) in the hospital at the end of God’s Favorite Idiot episode 5, “The Word (It’s Love)”. HR director and mid-level angel Frisbee (Steve Mallory) is able to “Harry Potter” the hospital to keep evil forces locked out, but it’s later revealed that the protection has a limited lifespan—conveniently set to expire in the final episode. In the current God’s Favorite Idiot season finale, Satan goes on a rampage through the hospital and nearly kills Frisbee before eventually cornering Mohsin, Wendy, and Gene. Before she can kill them, Wendy is given some sort of divine wisdom and is able to look into Satan’s heart, and is able to use her extreme vanity and lust for power against her.

Related: Netflix’s Most Watched Movies Of All Time

Wendy reveals that Satan feels she is too good to be spending the final battle on Earth, tending to mortals instead of “garnering the ultimate glory”. Instead of killing the humans, Satan poofs back to the heavens after admitting that she deserves to be the one in charge. This poses an interesting twist in God’s Favorite Idiot’s final moments. While it’s possible Satan will return to the cosmic battle in order to assist Lucifer in dethroning God, it’s equally possible that an ill-timed attempt to usurp Lucifer as the ultimate evil could pull focus and inadvertently allow God to regain the upper hand. With “Tom the Baptist” and company left alive to recruit more disciples and potentially figure out how to properly get God’s message out there, this also creates another possible obstacle for the bad guys.

Milton Throp (Leon Ford) is a minor villain throughout God’s Favorite Idiot who preaches that only his specific brand of 21st-century evangelical Christianity has the correct interpretation of God and the Bible, and that everyone else is destined to burn in Hell for all of eternity. Of course, Clark’s message that all religions are basically correct simultaneously doesn’t sit well with Throp’s crowd. Using his already substantial influence in the California televangelist scene, Throp actually makes a deal with Satan that lands him an even bigger, more mainstream audience that he is able to rally towards his side of hatred towards Clark, who they refer to as a false prophet and even a demon.

In the closing moments of God’s Favorite Idiot episode 8, Clark confronts Throp and is given divine knowledge about the childhood trauma that ultimately made the toxic preacher who he is. This revelation understandably shocks Throp, who very quickly begins to see that everything he thought about Clark is a lie that he helped perpetuate. After the pair ask for his help, Clark and Amily are able to escape to safety as Throp leads his masses to help Frisbee, who was in bad shape after being thrown out of a hospital window by Satan. While it appears that Throp has turned a corner in the series, and may even become an ally to the cause, the character has done a lot of damage and is just as likely to be abandoned by his massive following if he were to suddenly do a religions 180-degree turn and denounce everything he had previously preached.

God’s Favorite Idiot ends with Clark and Amily driving out of the city together, while Tom, Mohsin, Wendy and Gene have all survived their close encounters with Satan and the Four Horsemen. The series was originally intended to have a 16-episode season before production shut down, and Netflix is still expected to resume production on the second batch of episodes, which could see the cast officially split into two groups. Tom has been a diehard supporter of Clark’s cause from the very beginning and would be the natural pick to lead the “Council of Clark” in the main character’s absence, likely growing their numbers. This would also give God’s Favorite Idiot more opportunities to explore Moshin and Wendy’s romance, which despite the show’s flaws remains one of its more well-received (if underdeveloped) plot points.

It’s unclear where Clark and Amily are heading, or what they intend to do upon arrival, but God gave them a destination and essentially inferred that Clark would know what to do when it was time for him to know. Breaking the two main characters away from the pack would allow God’s Favorite Idiot Part 2 the space to continue pushing their relationship forwards in a less claustrophobic setting. Ben Falcone and Melissa McCarthy’s real-life husband and wife dynamic makes their on-screen pairing click when the writing is on-point and the two are given meaningful scenes with one another. Many of their early scenes are unfortunatey marred by frequent interruptions from others—mainly Tom and his legitimately uncomfortable obsession with pooping next to people. Getting these two groups away from each other, even just temporarily, could be a step in the right direction for God’s Favorite Idiot Part 2 if/when it arrives on Netfix.