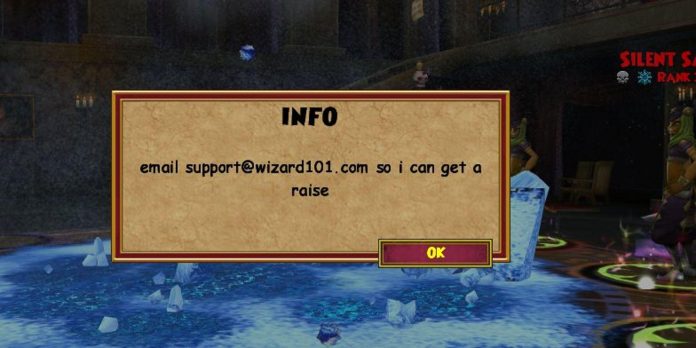 Wizard101 is a lesser—known family MMORPG, but recently it caused a stir due to a new dispute. The turn-based game, developed by KingsIsle Entertainment, was bombarded with harsh messages in the form of in-game ads, apparently from a disgruntled employee. Most of the messages contained profanity, but some of them were aimed at KingsIsle Entertainment and its work culture.

Scandalous statements forced the developer to turn off the MMORPG servers for about four hours to fix the situation. This may seem like a somewhat funny situation, especially for players who have witnessed pop-up ads. However, this may hint at something more serious related to the company and its attitude towards its employees.

Most of the offensive ads contain swear words and rude terms, one even mentioned Walter White from Breaking Bad. Others, however, strongly suggested that the hacker was a current employee of KingsIsle Entertainment. One message read, “I fucking hate my job,” and another said, “Write an email [email protected] so that I can get a promotion.” However, the most damning statement is probably the following: “Kings Isle is the worst company I’ve ever worked for.”

The developer quickly got rid of the ads, but the damage had already been done. People were talking about the mysterious hijacker (just in time for others to start shouting about the hacker from GTA 6), who is now called the “Server Dude”. At the moment, it is unclear who the Server Dude really is, but if they are employees, then they are clearly unhappy with the way KingsIsle Entertainment treats them.

Dude on the KingsIsle Entertainment server

Firstly, it should be said that the Server Dude can be an employee of the company, but it can also be an outsider posing as him. There is no information about their identity, so no one knows for sure. However, it made more fans explore KingsIsle Entertainment’s possibly questionable methods.

As a rule, the Wizard101 community is not too supportive of how KingsIsle Entertainment handles the game. For the most part, players think that the developer has become too greedy with his in-game transactions, and this is evident from the Wizard101 reviews on Steam. One of the most common complaints concerns the huge amount of money that players have to put out just to play the game. And the recent hacking fiasco suggests that things are not going smoothly inside the company either — but why?

One of the Server Dude ads is related to a salary increase, so maybe the problem is in the salaries of employees. Despite the fact that there are discussions on Reddit about how KingsIsle Entertainment tends to underestimate new employees, there is nothing definite, so it is difficult to draw any conclusion on this issue. However, the reviews of Glassdoor confirm the statements about the low level of remuneration. They also reveal a little more about the seemingly toxic work culture.

In addition to problems with low wages, another common feature of reviews about Glassdoor is that the company tends to suppress the creativity of employees. Perhaps that’s why games like Wizard101 are becoming more like money than really enjoyable games. One of the former employees even described in detail how any intention to add quality of life improvements to the game would lead to his dismissal, hinting at the same time that KingsIsle Entertainment is only interested in features that can increase profits. That was in 2020. More recent reviews speak about the inhumane mode of operation of the company and even about racism in the team.

It should be noted that Glassdoor reviews make up only a small part of the workforce (former or not). These reviews also tend to have a negative connotation, since former employees who quit on good terms are less likely to leave reviews at all. However, it’s hard to deny that KingsIsle Entertainment has a far from stellar track record for both the community and the workforce. It seems like it’s been like this for a long time, and all the Server Dude has done is pay attention to the problem.

Wizard101 is now available on PC.

The man who stands behind Tom Cruise and fakes the dipfakes...