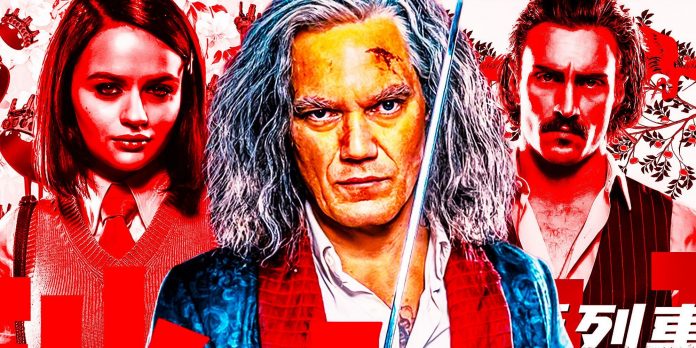 Bullet Train whitewashing controversy explained. Directed by David Leitch from a screenplay by Zak Olkewic, Bullet Train is an adaptation of the novel Maria Beetle by Kōtarō Isaka. The film follows the story of an assassin codenamed Ladybug, who is charged with boarding a bullet train from Tokyo to Kyoto to retrieve a mysterious briefcase. Before long, Ladybug realizes the other assassins on the train all have ties to each other, be it directly or otherwise.

Led by Brad Pitt, Bullet Train received a mixed critical reception, with an aggregated Rotten Tomatoes score of 54% from 231 reviews. The action film was finally released in theaters after a few delays, which pushed back its theatrical debut following the production’s wrap. While Bullet Train is finally playing in theaters, and will eventually premiere online, the film was mired in some controversy months in advance of its release because of the filmmakers’ casting choices, which sees Pitt playing Ladybug among others, including Aaron Taylor-Johnson and Michael Shannon. Many have accused the movie of whitewashing, the practice of casting white actors in non-white roles.

The original novel by Isaka is set in Japan. Here is the full explanation regarding Bullet Train’s whitewashing controversy, how it continues a Hollywood problem, what has been said about the casting choices, and what other future films can learn from what happened.

When Bullet Train cast Brad Pitt and the rest of the film’s main cast, it was criticized for whitewashing the source material. The novel, published in 2010, was also set in Japan, with an assassin heading from Tokyo to Kyoto on a bullet train. However, the characters in the book were Japanese, which is something the film mostly ignores when it comes to its casting, including its minor background characters. The majority of the film’s main cast are white, and even Michael Shannon’s White Death is portrayed as having overtaken a prominent criminal organization in Japan. The only Japanese actor in a major role is Andrew Koji, who plays Kimura, one of the assassins on the bullet train who is lured there by The Prince.

Changing the characters was also heavily criticized because Bullet Train maintains its Japan setting. The executive director of the Japanese American Citizens League, David Innoue, was especially vocal about the film’s whitewashed casting choices, telling AsAmNews that “Foreigners, or gaijin, remain a distinct minority in Japan, and to populate the movie with so many in the leading roles is ignoring the setting.” Conversely, Isaka told the New York Times that he feels his novel is “ethnically malleable” and that the casting doesn’t matter as much as the action does. It’s possible the author feels this way because the novel itself is influenced by Western media, including a nod to Thomas the Tank Engine. In the same article, director David Leitch revealed there was a conversation regarding a change of setting that would have moved the film from Tokyo to another location, but it was ultimately decided to keep to the source material.

Why Bullet Train’s Whitewashing Is An Issue

While Pitt’s Ladybug is an assassin who is clearly called in from elsewhere to retrieve the briefcase, Bullet Train’s overall whitewashing is an issue because it mostly erases Japanese characters from existing throughout the film. Not only are the majority of the film’s main cast white, but the passengers of the bullet train are largely — and notably — white as well. The woman who shushes Ladybug when he’s in conversation and Channing Tatum’s unnamed passenger dominate scenes while the rest of the train’s occupants (some of which are Japanese) have no prominence or speaking lines. Even Karen Fukuhara (of The Boys fame), who plays a train crew member, has one scene in which she says a few lines of dialogue, but it’s barely a blip on the radar and undermines the presence of the Japanese actors in minor roles.

Related: How To Watch Bullet Train Online: When Is The Movie Streaming?

Considering the fact that Bullet Train remains set in Japan, its erasure of Japanese characters plays into the idea that films with a majority non-white cast are not considered marketable or profitable, a racist fallacy that continues to rear its head whenever diversity and representation in films becomes the topic of discussion. The lack of Japanese characters in the film also deprives Asian actors from the opportunity of being in such a high-profile action movie. And, when the characters of a book are originally Japanese, the onscreen changes to their ethnicities become all the more obvious. It’s especially apparent when even the bullet train’s passenger have been whitewashed, which suggests the filmmakers didn’t necessarily care at all with regards to the film’s setting and how such casting would be perceived. What’s more, the majority of films in Hollywood are still largely made up of white casts, so the inclusion of underrepresented groups is crucial to combat the overall lack of diversity in the industry.

Bullet Train isn’t the first time a film has been criticized for whitewashing. Infamously, Ghost in the Shell received plenty of backlash for casting Scarlet Johansson in the leading role, which was based on a manga series by Japanese writer and artist Masamune Shirow. Ridley Scott also faced plenty of criticism for casting Joel Edgerton and Christian Bale in Exodus: Gods and Kings, with both of the actors playing Egyptian characters in a film that was famously whitewashed. Similarly, Angelina Jolie’s casting in Wanted was met with controversy as well because her character was originally a Black woman. The list goes on and highlights an ongoing problem within Hollywood, which collectively turns a blind eye when it comes to whitewashed casting. It’s considered especially terrible due to the lack of overall representation in the film and TV industry, which is still heavily dominated by white actors and decision-makers.

What Future Films Can Learn From Bullet Train’s Controversy

As Hollywood continues trying to diversify films and TV shows, racism and stereotypes of underrepresented groups remain a problem overall. Fans have been vocal about certain issues like whitewashing, but Bullet Train is an example of what films shouldn’t do when it comes to casting. If, for example, a movie is set in another country that is not the United States, studio execs and casting managers should hire actors who are ethnically appropriate. In Bullet Train’s instance, there are plenty of Japanese or Japanese American actors who would have been a shoe-in for the roles in the film. It is no longer enough to hire white actors in potentially non-white roles, especially when there is already a lack of opportunities in Hollywood for underrepresented groups of people. Filmmakers and studio execs should be more cognizant of hiring white actors to play non-white roles in the future, which would make the films they’re in all the richer and more dynamic because of it.