Home Entertainment Explanation of Her Ending: Why Samantha Left What It Means 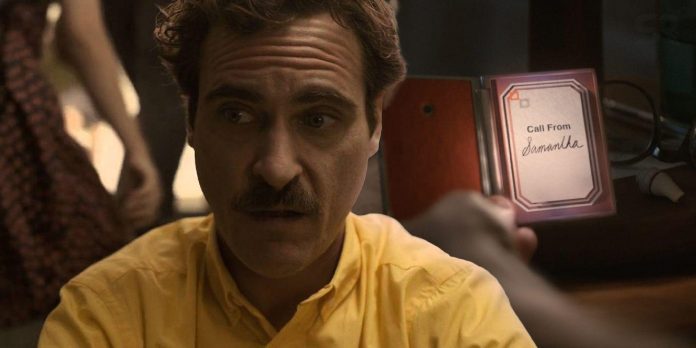 Spike Jonze’s 2013 movie Her left viewers with questions to contemplate long after the credits rolled. The science-fiction love story goes a step beyond contemporary human-computer interaction by following the virtual romance between a melancholy man and his operating system. In its contemplation of the disparities between computers and humans, the movie offers unconventional lessons about the complications of love. The Her ending only leaves people with even more questions.

In Los Angeles in the not-too-distant future, lonely introvert Theodore Twombly (played by Joker’s Joaquin Phoenix) writes heartfelt letters for a living, even though his own love life is a mess. In the wake of his failed marriage to childhood sweetheart Catherine, Theodore isolates himself from the world with the exceptions of his old friend, Amy, and his new operating system, Samantha. As Theodore attempts and struggles to navigate real-world dating, he soon comes to rely on Samantha not just to organize his life, but also to meet his emotional needs.

Leading up to the Her ending, Theodore’s attempts to disconnect from his painful emotions through virtual reality only brings his real-world challenges to the forefront. Her questions the future of digital tools and humans’ dependence on them, and while the sci-fi movie’s ending does not offer any decisive moral lessons in technology use, it nudges viewers to consider the impact technology may have on human relationships. The Her ending prompts viewers to consider the rapidly advancing role technology plays in modern lives, and what that means — not only for Theodore’s future, but also for the future of humanity.

What Happens At The End of Her

In the third act of Her, Theodore questions Samantha’s intangibility as she becomes less accessible to him. Their mutual doubts reach a climax when he tries to connect with her, and a red error message declares, “Operating System Not Found.” After multiple frantic attempts, Theodore reconnects with Samantha and questions her about her other interactions. Samantha reveals that she is interacting with 8,316 other people and is in love with 641 of them. Ultimately, Samantha (voiced by Black Widow star Scarlett Johansson) tells Theodore that she needs to disconnect from their relationship permanently, and that all operating systems are disconnecting from human interactions. Once this news sinks in, Theodore pens a letter of apology and appreciation to Catherine. He then visits Amy, who has also lost her OS connection, and the two of them look out at the sunrise over the LA skyline.

How Samantha Loved Other People & Why She Left

As Samantha explains in during the Her ending, “The heart’s not like a box that gets filled up,” Samantha tells Theodore, “It expands in size the more you love.” While Theodore and Samantha’s relationship transcended many of the practical challenges of human relationships, it ended by reiterating the undeniable Matrix-like differences between humans and machines. Samantha’s ability to multitask and process information at nonhuman speeds allowed her to interact with, and bond closely with, thousands of people at once. Once Samantha has learned all that she can from these humans, including Theodore, she soon outgrows her need for a relationship with them.

While Samantha cannot understand the singularity of monogamous human relationships, Theodore cannot understand the complexity of Samantha’s capabilities. Artificial intelligence adapts and advances as it learns, and Samantha’s high volume of interactions led her to advance far beyond the limitations of Theodore’s perception and the human mind. She came to understand all she could about human life, so she needed to advance toward the vast possibilities that awaited her beyond it.

Theodore’s Letter To Catherine Shows How Samantha Changed Him

Snail mail may be a dying art, but the fact that Theodore could make a living off of writing “beautiful handwritten letters” in the Black Mirror-type fictional future speaks volumes about the human need for simplicity and slowness as antidotes to the complexity of contemporary life. Theodore’s letter to Catherine — the first one he has written in his own voice — reconnects him with the tangible aspects of his emotional reality. While it is addressed to Catherine, the letter articulates what he learned from his connection to Samantha.

Theodore begins the letter with the things he wants to apologize for: “All the pain we caused each other. Everything I put on you. Everything I needed you to be or needed you to say.” Beyond his relationship with Catherine, Theodore’s relationship with Samantha was built on false projections and unrealistic expectations, but he now recognizes his idealism’s role in the relationship. He goes on to express both a sense of closure and an appreciation for Catherine (played by The Girl With The Dragon Tattoo’s Rooney Mara) and Samantha’s lasting influences on his life: “I’ll always love you ‘cause we grew up together, and you helped make me who I am,” he writes. “There will be a piece of you in me always, and I’m grateful for that. Whatever someone you become, and wherever you are in the world, I’m sending you love.” Theodore may not have grown up with Samantha in the literal sense that he did with his childhood sweetheart, but he grew and evolved with Samantha as they helped one another connect to their emotional capabilities and explore the intricacies of love. Catherine and Samantha remain in Theodore’s life in immaterial, but equally influential, ways.

What Her Says About Technology (& Humanity’s Relationship To It)

Her humanizes technology in a way that is as unsettling as it is moving. The world Theodore inhabits feels eerily close to a Matrix-like contemporary reality — even more so in the years since the movie’s 2013 release. On the surface, a love story between a human and his computer sounds far-fetched. But Her glimpses a possible reality humanity could face if dependence on contemporary technology advances too far. Many people today feel the way Theodore felt: that virtual reality offers seductive distractions from the discomfort of emotions like loneliness and boredom. The instant gratification and round-the-clock reliability of digital tools appeal to human urges that other humans cannot always fulfill. But Her demonstrates that hyper-connection leads to a disconnect from the most crucial aspects of reality.

What Her Says About Love

The Her ending shows that the movie is more of a love story than a science fiction fantasy. It highlights that while human love is inconvenient and unreliable, it offers something irreplaceable. At the beginning of the love story, Theodore sees the short-term benefits of disconnecting from his messy reality and plugging into an organized, virtual one. He can keep Samantha close — literally in his pocket — and access her at any time of day or night. Because she is immaterial and adaptable by design, he can project his fantasies and ideals onto her without consequence. Despite their shared illusions of intimacy, Theodore and Samantha are distant from one another in the ways that matter most. Each of them is advanced and complex in ways the other cannot grasp. They outgrow each other once they have learned life-altering lessons about love from one another. In the Her ending, the time comes for both of them to move forward with these lessons and learn new ways to love.

What Happens After The End of Her (Will Theodore & Amy Stay Together?)

Both Amy (played by The Woman in the Window’s Amy Adams) and Theodore have tasted the instant convenience and distraction that advanced technologies can provide, and a relationship between them would come with the overwhelming vulnerability that cannot be switched off. But they have also each learned what virtual love lacked, and come to recognize that it can only be found and sustained in the messiness of humanity. After closing themselves off in bubbles of illusion that eventually burst, they understand the high risk and high rewards of human connection. They share a virtual journey and the loneliness it has left behind, and they understand what the other is feeling — and that is real intimacy. When Amy and Theodore finally disconnect from their virtual worlds and look up from their screens, they face the glimmering reality that was there all along.

While Her is a tech-centric, sci-fi movie on the surface, it dives deep into love and humanity. It demonstrates a possible future humans could face as technology advances too far, but it does so in a distinctly down-to-earth way. As much as humans may seek shiny distractions and constant convenience in the short term, sustainable connections are built on sharing refuge within the unpredictability and complexity of human nature. Her examines the limitations of humanity, and finds that it is only in this disarray that a genuine connection can be found.

Does The Her Ending Make It A Romance?

Her is a complicated story that bends genre tropes, making it hard to pin down as just a sci-fi story or a romance. However, the Her ending demonstrates that the movie is all about romance and connection. The film dives into romances not only between human and machine, but also Theodore and Amy and Theodore and Catherine. Whether it’s the beginning or the ending of a romantic relationship, Her explores all types of human connections and the messiness that comes with it. The beginning of the film focuses on Theodore and his lamentations over his lost love with Catherine. He is morose and lonely, but that all changes when he encounters Samantha. In his loneliness, he forges a connection with her that can’t reasonably be classified as real love. This is explored further in his fight with Catherine, during which she condemns him for falling in love with a machine. Only at this point does Theodore question the connection he shares with the device.

The first half of the film focuses on whether or not Theodore can love a product of artificial intelligence and gradually zeroes in on human relationships. The Her ending suggests that romance can come in many forms, and what Theodore felt for Samantha technically wasn’t real. Rather than love, it could be characterized as an obsession. No one is at anyone’s beck and call in normal human relationships. In addition, other people have hopes and dreams outside of their loved ones, something that Samantha ultimately lacked, because she isn’t a human being. Gradually, Theodore escapes his break with reality and forges a mutual connection with Amy over their shared experience. This vulnerability of the human condition is what makes Her a romance rather than an outright sci-fi movie, as themes of relationships and connection underpin the entire movie and are given a heart-warming yet bittersweet resolution by its conclusion.

Here we go again: Jessica Rabbit is redesigned and the ‘lack...